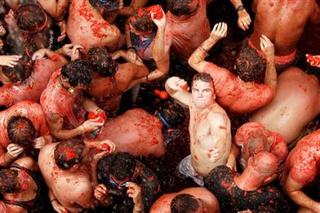 Ah, those wacky Spaniards. When they're not being voluntarily trampled by bulls, they're apparently pelting each other with 130 tons of ripe tomatoes. Next I expect to see them taking turns jumping off the Puerta de Alcalá into vats of flan.

Apparently the tomato fight tradition, which involves thousands of people in Madrid hurling truckloads of tomatoes at each other every August, began back in the 1940s. It seems like an odd time to start such a tradition, but who knows? Maybe they were preparing to throw fruit at the Nazis when they marched in from France. If there's one thing Hitler hated, it was a tough stain.

Anyway, while I'm sure being covered in tomato goo must break up the summertime blahs, I have to say I'm against it. It's a waste of good tomatoes that could otherwise be used more productively, for instance, as projectiles at a Clay Aiken concert. (But not until after "Bridge Over Troubled Water" ... That always chokes me up.)

It seems that this is not so much a tradition but a ploy by the Heinz people to make ketchup in a more cost effective way.
(Mmmm! Armpit flavored Ketchup.)

Ummmmm....can you tell me what color red and yellow makes? The very idea is repulsive. I'd rather play in pudding with 1 person than even think of jumping up and down on tomatoes! YUCK!http://praynladysblessings.blogspot.com