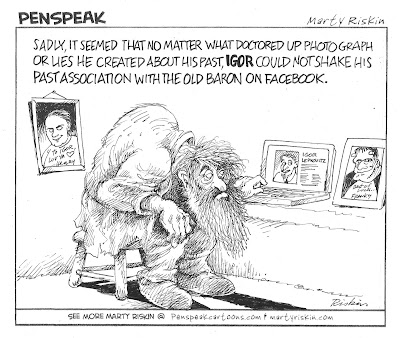 You may have sometimes wondered why certain people spend so much time on Facebook. There are several possibilities, including:

1) To get as many pictures of your children onto the Internet as possible, so strangers know what they look like;

2) To let people know the awesome word you just played in online Scrabble;

3) To keep up with friends who you’d cross the street to avoid if you saw them coming;

4) To suffer acute feelings of misery and loneliness, not necessarily in that order.

If we’re to believe a new university study, that last one may be more likely than you’d think. According to Reuters, the study found “one in three people felt worse … and more dissatisfied with their lives” after viewing their friends’ profiles on Facebook. Those people are clearly doing it wrong.

After all, the only way your Facebook friends are going to have more appealing lives than you is if you fail to keep up with their level of meticulously crafted fraudulence. Because, as Mark Zuckerberg often says, Facebook isn’t about the life you have, it’s about the life you PRETEND to have. (OK, he doesn’t actually say that, but I’m sure he’s thinking it.)

Take this finding from the study: “Vacation photos were the biggest cause of resentment.” This jealousy is completely unwarranted, because no matter how awful your vacation is, you can usually get your family to look happy at least long enough to snap a few pictures — perhaps because you’ve bribed or threatened them, or because they just saw Grumpy fall off the Mickey’s Soundsational Parade float. (Which, admittedly, would be funny.)

People then post the pictures on Facebook with the caption, “Another great vacation day with the fam!” This is code for, “Here are the three minutes when we didn’t look miserable,” which you should remember before starting into your spiral of depression.

Here’s another one: “Women were more likely to envy physical attractiveness.” Next time you find yourself jealous of how good someone else looks on Facebook, please remember we live in the age of the digital photo. That means people can consider dozens, even hundreds, of pictures of themselves before finding that very special one that — thanks to a quirk of lighting, shadow and the fortuitous placement of a potted plant, and possibly Photoshop — makes them look like a vaguely blurry Gisele Bundchen.

That photo is immediately posted on Facebook, and the others are deleted with prejudice, having committed the crime of being, you know, accurate. (I’m told this problem has spilled over into online dating, because instead of posting pictures that show what they actually look like, many would-be daters are posting pictures of Gisele Bundchen. And that’s just the men.)

Then there’s envy over “How many ‘likes’ or comments were made on photos and postings.” This one is tougher, because while you can pick your friends you can’t make them like you, or your photos of your very special children, or that thing you found on the Internet with the angry cat on it. (Which, admittedly, is pretty funny.)

Your best bet here is to try to inspire the “guilt like” (and its corollary, the “guilt birthday greeting”) by liking as many of your friends’ posts as you can, thus making them feel obligated to like you back. Barring that, some people have been known to create fake Facebook profiles and use them to elevate their like counts. (Er … Not me. Other people.)

I suppose the other thing to keep in mind is that the respondents in the study were from Germany, where misery and loneliness are recreational activities, like whist. But no matter where you’re from, I would think a good remedy for Facebook depression might be to shut it down, go outside, and try to “like” a few things in the real world.

Or on Twitter. I hear Kim Kardashian’s on there.
Posted by Pete Chianca at 7:00 AM No comments:

Column: One man’s hit is another man’s ‘Les Mis’

If you’re a card-carrying male person, you know there are only three kinds of Hugh Jackman movies that are acceptable for you to see:

1) Movies in which he slashes evil mutants with his adamantium metal claws;

2) Movies in which he kills vampires with a giant crossbow;

Not included on that list, you’ll notice, are movies in which he spends hours singing into the camera at such an immediate distance that it’s impossible not to notice his unkempt nostril hairs. (Or dapper graying curls, depending on whether at that moment he’s a starving parole breaker or an aging reclusive single father, or possibly the mayor. I lost track somewhere in there.)

I’m referring of course to the movie adaptation of “Les Miserables,” in which Hugh Jackman as Jean Valjean is basically singing the entire time, whether he’s dragging ships to shore, running his factory or visiting Anne Hathaway in France’s dingiest hospital, where she’s dying in a teary-eyed, short-haired kind of way. Fortunately for Jean Valjean, everyone around him is also singing (even Russell Crowe!) so none of this seems out of the ordinary.

Now you might think I went to see this film because my lovely wife dragged me there, but I actually went because I just happen to be a fan of “Les Miserables” – I’ve seen the musical three times, and I dare say that I even find it, well, stirring. Yes, I know that may call into question my masculinity and my artistic preferences, not to mention indicating an unusually high tolerance for bombast.

I first saw “Les Miserables” in Boston when I was in college for the same reason that college students do everything – because I could get discount tickets. (No, not because I was drunk – if that were the case, I would have gone to “Cats.”) It didn’t take me long to realize that not only did Les Mis have a pretty compelling story, but it was just epic enough to truly lend itself to full-throated warbling. Plus, muskets!

Not that I’m a full Les Mis apologist. There are a few things I’ve found off-putting about the musical to this day, including:

1) Marius. He’s a drip, what with all his love-at-first-sight gushing when he should be figuring out how to load his musket. Of course, that makes him a perfect match for Cosette – together they make the drippiest couple in musical theater history, and that includes Emile and Nellie in “South Pacific.” (Er … I had discount tickets!)

2) I can’t figure out the math – every time I add it up Valjean comes out to be about 200 years old, and yet he can still carry grown men through sewers for days on end. (Although the next day he wakes up and can’t lift his valise, and 20 minutes later, spoiler alert, he’s dead, so there you go.)

Still, it’s pretty gripping for a musical, and I can’t really imagine a way the movie could have done a better job adapting it. Jackman has this uncanny ability to project an inner sincerity, even when he’s slashing mutants, so he’s an ideal Valjean. And Hathaway is certainly good at conveying “distraught” – she generates more close-up actual tears than all the other actors put together. Although it was admittedly pretty close.

As for Crowe, he’s not the greatest singer in the world, but he does a nice job projecting the sense that if you didn’t fully appreciate his performance he might reach through the screen and smolder you to death. It’s a lot better than Clint Eastwood’s singing in “Paint Your Wagon,” which, spoiler alert, is exactly how you’d imagine Clint Eastwood’s singing.

Regardless, though, I’d argue that even if “Les Miserables” is flawed, it’s impossible not to get caught up in the sweeping story of redemption and the soaring (if bombastic) music that goes along with it. I challenge even the most manly audience members, the ones who thought Liam Neeson was too wishy-washy in the “Taken” movies, to listen to Valjean and company sing “One Day More” and not feel at least a little bit stirred.
And don’t worry: If it makes you uncomfortable, you can just close your eyes and think about crossbows.
Posted by Pete Chianca at 6:00 PM No comments:

Of all the things that are in, we’d be hard pressed to find something more in than frozen yogurt. That’s the only explanation for the glut of frozen yogurt establishments bursting from the ground fully formed, like Superman’s Fortress of Solitude. By process of elimination, that would probably mean ice cream is out … But just try getting between us and our Chunky Monkey.

Tablets, particularly iPads, are in – people carry them around now like your gym teacher used to carry around that stupid clipboard. But don’t worry, your smartphone is still in, at least until they figure out how to attach an iPad to the side of your head while you drive. And now that everyone has a tablet, laptops are on their way out, and all the desktop computers have now been dismantled and turned into yogurt shops.

As far as the types of phones that are in, Blackberries are now being used primarily to keep napkins from flying off picnic tables, and even the iPhone has lost some of its sheen since the iPhone 5 wound up requiring all sorts of new chargers and cables. (Chargers and cables are out.) The Samsung Galaxy is the new in hip phone: We know that because the commercials tell us they are. Commercials are in.

Online, creating memes and then distributing them via Instagram is in. Knowing what both of those things are is also in. Sorry, grandpa. Also, we’re seeing less and less class among students as more colleges move out of the classroom and onto the Web. In a related story, interacting with other humans is out, but you already knew that.

By now, tiny electric cars that fit approximately one and a half passengers were supposed to be in. That hasn’t seemed to work out, unless they’ve been crammed inside all the minivans and SUVs. Minivans and SUVs are in, and as a result, so are giant, Cristal Brut-filled swimming pools in Saudi Arabia.

Speaking of spirits, Pabst Blue Ribbon is out and exotic micro-beers are in; contrary to popular belief, they do not come in tiny little mugs. The HBO show “Game of Thrones” even has its own beer, which presumably comes with a lot of swearing and gratuitous nudity.

Among the kids, iCarly is finally off the air, and with it its entire cast of mean lunatics. Mean lunatics are out – sorry, Nickelodeon. Bridgit Mendler of Disney Channel’s “Good Luck Charlie” is in, but as a singer, since all Disney stars are required to sing, dance, act and sleep in a box in the studio until needed for another show or concert tour. And “Gangnam Style” is finally on its way out, now that it’s been permanently imprinted on our teenagers’ brains; it’s playing there right now on an eternal loop, which would explain a lot.

And finally, learning everything you missed all year from our in-and-out column is in. Who needs other news sources? Cue pending apocalypse, again.

Peter Chianca is editor in chief for GateHouse Media New England’s north-of-Boston newspapers and websites and author of “Glory Days: Springsteen’s Greatest Albums.” Follow him on Twitter at twitter.com/pchianca.
Posted by Pete Chianca at 11:37 AM 1 comment: