FRAMINGHAM, Mass. (CAP) - Sen. Scott Brown was joined yesterday on the campaign trail in Framingham by New Jersey Gov. Chris Christie, one of the nation's leading champions of balanced budgets and government reform.

There, Christie praised Brown's bipartisan record and his ability to work with Democrats to solve problems, and then swallowed him whole.

Witnesses say Christie extolled Brown's bipartisan efforts in the Senate, and then unhinged his jaw, not unlike a giant, corpulent serpent, and ate Brown from the head down, slowly drawing the senator into his tremendous gullet and digesting him over a period of several hours.

Christie, who was named the "least scary" and "fattest" potential GOP presidential contender in a USA Today/Gallup poll in August of 2011, has only rarely eaten his fellow Republicans, but today reportedly went on stage hungry after missing his usual lunch of 2,625 pounds of zooplankton.

"I really respect Christie's positions on fiscal issues," noted Cyndi Carlson of Sherborn, Mass., who added that she'd been undecided until Christie's endorsement prompted her to go for Brown. "Until Christie ate him, that is. I guess I'll have to vote for Elizabeth Warren now."

Column: What did Ella Fitzgerald do to deserve Rod Stewart? 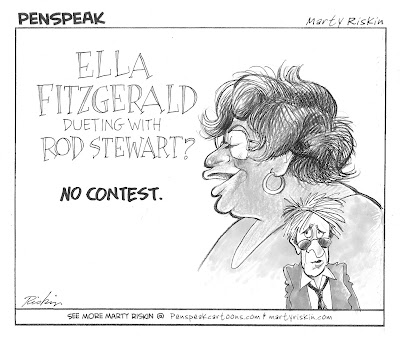 Followers of this column may recall that I am used to receiving emails from famous people — for instance, there was the time that Joan Collins sent me three identical emails about her new jewelry line. Of course that was in 2007 and I haven’t heard from her since, but I’m sure she’ll get back in touch with me if she has anything really important to share, such as another new jewelry line.

But I have to admit I was surprised this week when I got an email from none other than Rod Stewart. At first I wondered what Rod Stewart could possibly want with me — I figured he wasn’t emailing to ask for $5 like Barack Obama and Joe Biden do two or three times a day, since Rod Stewart has plenty of money, which he uses on important charitable activities such as buying himself new wives.

As it turns out, though, Rod was writing me to let me know about his impending Christmas album, “Merry Christmas, Baby.” (I use the word “impending” because “upcoming” somehow didn’t seem sufficiently apocalyptic.) It was the subject line of the email that immediately caught my eye: “New album featuring collaborations with Michael Bublé & Ella Fitzgerald,” a statement so fundamentally wrong that I’m fairly sure I heard the heavens crack open and rain a torrent of bitter tears for all eternity.

I’m not talking about the Michael Bublé part — I don’t know much about Michael Bublé other than that he’d probably be right at home next to Rod Stewart, perhaps even joined with him at the torso, like Chang and Eng. It’s the second part, about dueting with Ella Fitzgerald: For one thing, Ella Fitzgerald died in 1996, and for another, I’m pretty sure her final words were, “Well, at least now I’ll never have to do a duet with Rod Stewart.”

Not that I’m completely against duets with dead people. I didn’t really mind the one Natalie Cole did with her late father, Nat King Cole, which you couldn’t help but think was sweet and moving as long as you’d taken enough Zoloft. But there are plenty of far worse examples, such as the album “Duets” by Frank Sinatra, who was alive at the time but only technically.

But I’ll go on the record as being completely against the idea of a Rod Stewart/Ella Fitzgerald “collaboration,” which is really only a collaboration in the way that eating a hamburger is a collaboration with the cow. First of all, Ella was known as the “First Lady of Song,” and pairing her with Rod Stewart would seem to indicate that he was perhaps the “President of Song.” This is completely and entirely false unless the song in question happens to be “Do Ya Think I’m Sexy,” in which case he would be running unopposed.

Just so as not to jump to any conclusions, though, I did watch the “trailer” for the album, but it didn’t have any snippets from the Ella duet. (Although it did have a clip of a Christmas video with Cee Lo Green, who looked sort of like Burl Ives, if Burl Ives had been eaten by Cee Lo Green.) It also had plenty of Rod Stewart, shamelessly showing off how he has monopolized the United Kingdom’s entire supply of gaudily colored plaid jackets. Rod is now 67 and apparently can no longer lift his arms above chest level, possibly because his skin has been tightened so many times it’s started to affect his armpits.

Frankly, though, I don’t have to hear it to know that his duet with Ella is a bad idea. I’m not saying Rod Stewart should never sing with other people — for instance, there was that time he sang that song from “The Three Musketeers” with Bryan Adams and Sting, which is still reportedly in heavy rotation at the Guantanamo Bay detention camp.

But when it comes to Ella — who in her day had mopped up the floor with such duet partners as Sinatra, Louis Armstrong and Bing Crosby — he’d be doing himself a favor by sticking with someone more in his league, and alive enough to make the decision on her own.

I’m thinking Joan Collins may be available.
Posted by Pete Chianca at 10:47 AM No comments: