Column: What's in a name? Sometimes not much

My sister and her husband recently welcomed a new baby, a blessed event that was of course preceded by the usual litany of name suggestions from the rest of the family. For instance, my brother suggested “Bubba,” and I wish I could tell you he was kidding.

Naming a baby is always a challenge — I know when my kids (Jacqueline and Timothy) were born, our main goal was to not pick a name that sounded like it was invented in the last 20 minutes. I only say this because of the number of kids named after artificial sweeteners or a type of scarf, a figure that, if the names parents scream at the mall are any indication, I’d put at about 85 percent. (“Splenda! Aspartame! Stop making fun of little Pashmina!” etc.)

Case in point is the annual list of most popular baby names, which came out recently and which confirmed, among other things, that there is nothing that can’t be turned into a name with just a little creativity and a complete disregard for the child’s future mental health.

[Read the rest of this week's AT LARGE by Peter Chianca here.]
Posted by Pete Chianca at 4:39 PM 1 comment:

In their defense, Ludacris was the musical act, so maybe he drove them to it

Back when I was at Tufts -- let's just say it was post-Bee Gees but before college kids all had cell phones stapled to the sides of their heads -- the annual Spring Fling concert usually ended with authorities having to call an ambulance for some idiot freshman who'd ingested enough alcohol to power a twin-engine Cessna. Ah, those were the days.

Because now, apparently, the stupidity isn't limited to that one freshman. According to Wicked Local Medford, 30 (that's 3-0) Tufts students fell ill from drinking at the school’s Spring Fling concert last month -- enough to cause the Medford Police to declare a "Mass Casualty Incident."

Tufts implemented a new policy for the Spring Fling this year where any bags brought to the concert needed to be transparent. Not to be thwarted, many students reportedly drank their fill of alcohol before the show. The unseasonably hot temperatures of the day took care of the rest.

What's scary is ... these people were smart enough to get into Tufts.

Posted by Pete Chianca at 10:46 AM No comments:

Column: Making the most of your edu-vacation

There comes a time in every parent’s life when you realize that you want the family vacation to be about more than riding roller coasters or sitting on a beach. You want it to be educational and enriching, and to foster an appreciation for the importance of our heritage. This is of course a huge error, right up there with suggesting your kids exercise “independent thought.”

Because if you’ve already been to Disney World, finding yourself on vacation in, say, a huge (albeit historical) cemetery can be a hard sell for the under-10 set. And it turns out that telling them how much %$&#! money you spent to get them there carries way less weight with kids than it ought to.

With that, I thought it could be useful if I shared what I learned on our recent family vacation to our nation’s capitol, Washington D.C., a destination whose dearth of roller coasters is more than mitigated by its statues of dead guys. At least, that’s what we were banking on.

[Read the rest of AT LARGE by Peter Chianca here.]

Posted by Pete Chianca at 10:19 PM No comments:

☛ Scientists engineer a glow-in-the-dark dog. Finally, a solution to the dire tripping-over-dogs-in-the-dark problem.

☛ New reports indicate that Yes-Asia tour promises to be this summer's most annoying.

☛ OK, I take back everything I ever said about "Footloose" being a bunch of baloney.

☛ I knew it! "Report: Cosmo Has Run Same Article Every Month For 27 Years."

☛ And finally, Thanks to my daughter's spot-on Jonas Brothers impersonation, I now have "(I Fell in Love With the) Pizza Girl" stuck in my head. The only thing would be worse would be if I had the video in there with it.

Darn it. There it is.
Posted by Pete Chianca at 6:23 PM No comments:

Email ThisBlogThis!Share to TwitterShare to FacebookShare to Pinterest
Labels: Links

Column: Have you thanked your mother today?

It’s Mother’s Day, the time of year when children honor their mothers by taking them out to brunch. This way Mom can have a nice, relaxing meal, and still be back home early enough to do all the laundry, shop for groceries and vacuum up all the crumbs from the brunch doggie bags.

Of course, as a child you just take for granted that your mother will do all these things happily in exchange for that one meal a year and a construction paper sunflower you made in art class. It’s not until you have kids of your own that you realize being a mother can be a pretty thankless job, sort of like being Joe Biden’s press secretary.

With that in mind, I thought I would take this opportunity to thank my own mother for some of the things she had to put up with when I was a kid. Granted, I never came home with a tattoo on my neck or set the house on fire (the latter mostly just out of sheer luck), but I figure it still couldn’t have been easy putting up with the following:

[For the rest of this week's AT LARGE by Peter Chianca, click here.]

Posted by Pete Chianca at 6:38 AM No comments:

How reading newspapers can keep you from getting rabies

Amid the whole kerfuffle over the Boston Globe and its possible (and now apparently averted) shutdown, some people have wondered aloud why it is that we need newspapers. Is it because they are guardians of the public trust? Watchdogs of government malfeasance? The place where you can read “Wizard of Id”? Well, yes, all those things … But mostly it’s because newspapers save lives.

When Megan Kulikoski picked up her Saugus Advertiser on the morning of Thursday, April 30, she immediately panicked. A front-page story about a rabid cat that had attacked three other Saugus residents grabbed her attention. At that moment she realized she had been attacked by the same black cat on the morning of April 22.

Thanks to that newspaper report (which she noticed because it was on the top of the front page, not because she happened to click on a link somewhere), Kulikoski was able to get potentially life-saving rabies treatment — just a few more days and it would have been too late.

So the moral of this story is, all of you people who say that we don’t need newspapers will be singing another tune when newspapers are gone and you all have rabies. 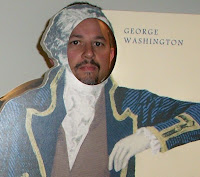 I've been back for a week, but feel like I'm still catching up from our family vacation to Baltimore, Washington D.C. and Penn State. I thought going back to work would help me to relax, but people keep asking me to do stuff, even though my head is down on my desk and I'm making grunting noises.

Hence my lack of posts, but until I get back in the swing of things, you can relive my trip here if you missed these on Twitter while I was away:

Unfortunately the sun only lasted until right before the Orioles game started, at which point I was sure the entire grounds crew was going to be struck by lightning. I'm pretty sure we could have somehow credited Jersey with that too.

If you're doing the math, you'll realize that we had to make it to that 7:15 tour from Baltimore, meaning we left at about 5:15 a.m. But it was worth it, because my kids got to see a secret service agent walking Bo, the First Dog. He (the agent, not the dog) had a look on his face that seemed to say nobody had mentioned anything about this in secret service school.

11:07 PM Apr 22nd: Night tour of the monuments was fantastic! My camera picked up many interesting blurs.

It would help if they let us open the windows on the trolley.

9:08 AM Apr 24th: Museum of Natural History -- a little obsessed with the dinosaurs. I'm just saying.

I'm pretty sure the place is designed so that every time you turn a corner, there's the skeletal remains of something. It's like being in a Grateful Dead video.

8:16 AM Apr 25th: What I learned at Mt. Vernon: George Washington was DREAMY! At least according to the little movie.

It's true -- the movie was good, but I got a little uncomfortable when George started giving Martha the goo-goo eyes. Some guy in the back shouted "Get a room!"

9:10 PM Apr 25th: At Penn State ... When did they pass the law that college girls had to dress like Julia Roberts at the start of Pretty Woman?

This was what we got for going out after 9 p.m. on a day when it was above 60 degrees. If their shorts had gotten any shorter, they would have been halter tops. Luckily, I thought quickly and told my daughter they must all be going to a ginormous costume party, dressed as hookers.

10:37 PM Apr 26th: I go away for a few days and suddenly the whole world is swine flu crazy. And here I thought I had run out of things to worry about.

Did somebody just cough???
Posted by Pete Chianca at 10:13 PM No comments: