It would be hard to overstate the profound social and technological impact the Atari 2600 game system had on my childhood. Prior to that I’d spent most of my formative years throwing balls at my sister and pushing little plastic game pieces around various slabs of cardboard. Now, suddenly, I had the ability to direct slivers of light into a phalanx of bulbous alien spaceships.

It was alarmingly satisfying — I felt like a frontier child who’d just stoned his first beaver.

Unfortunately, once the joystick concept evolved beyond the little pole and single red button, my interest waned. I’ve known people who swear by the Xboxes and Playstations, but every time I’ve picked up one of those high-tech controllers, I’ve been completely flummoxed — frankly, I can’t imagine how 11-year-olds manage the dexterity you’d need to effectively rough up the hookers and pizza delivery men in “Grand Theft Auto.”

So my wife and I decided to keep videogames out of our house, explaining to our children, calmly and logically, that videogames were imaginary, like unicorns. This worked until they went to school and their friends let the Nintendo out of the bag, along with several other things we were trying to keep under wraps, like Barney the Dinosaur, and allowance.

Still we resisted, until they came to us recently in a united front.

“We need a Wii,” they said, practically in unison.

“It’s exercise,” my daughter added. I knew if we didn’t give in it wouldn’t be long before they were claiming it was made entirely of broccoli, and that immediately after playing they would consume it in its entirety.

So thanks to some generous grandparents, we became owners of a Wii game system, known for its wireless controller with motion sensors. I wasn’t sure what this meant until the first time I got my hands on one, and immediately noticed the difference between it and the controllers festooned with an arcane combination of knobs and buttons.

For instance, in Wii baseball, the ball comes at you and you … swing your arm. That’s it. Bowling? Swing your arm. Tennis? Swing your arm. Now, this was a game system I could understand — if I’d had one of these in 1982, I’d still be in my parents’ basement, clubbing Donkey Kong with my little wrench.

And the best part is, you can create a little game character that looks like you. Or, in my case, like Brad Pitt with my glasses and goatee.

Yes, that’s right … at first I was ostensibly taking part to help the kids learn how to play, but it wasn’t long before they would leave the room and I’d still be there, swinging the remote wildly through the air like a man literally battling his inner demons. In fact, it wasn’t until I tried Wii boxing that I realized I’m someone who really, really needs to slug somebody, in particular without the chance of being hit back.

So once we figured out the best way to share the device (Dad first, then whoever can pry it out of my fingers), I have to say that not only has the Wii added a little more exercise into our lives — I’m thinking soon we’ll all have gigantic forearms, like Popeye — it’s also brought the family closer together, in that way that only a marvel of modern technology can do. Particularly a marvel of modern technology that, according to the product warning, may cause seizures, eyestrain, electric shock and motion sickness.

Note: This column appeared originally in GoodLife magazine. Visit GoodLife on the Web at wickedlocal.com/goodlife. Peter Chianca is a CNC managing editor and the brains behind “The At Large Blog” (chianca-at-large.blogspot.com) and “The Shorelines Blog” (blogs.townonline.com/shorelines).
Posted by Pete Chianca at 9:58 PM 1 comment:

Turns out the Tokyo woman wasn't charged with murder, since it's still not illegal to kill a fake digital person, even in Japan. Instead she's in trouble for hacking into an online game as her ex-husband (or was it her fake digital ex-husband -- I can't keep up) in order to kill him off.

I don't know ... Those Grand Theft Auto guys seem to get away with a lot more than that.
Posted by Pete Chianca at 10:45 PM No comments:

Even if Obama doesn't win, his entire candidacy would have been worth it for this:

Now if only the Sweathogs would get back together for Obama. Come on guys, there's 11 days left!
Posted by Pete Chianca at 10:38 AM No comments:

Yes, the Red Sox may not have made it to the World Series this year, but look at the bright side, Boston fans: You can still get a free taco. See, don't you feel better?

I'm referring of course to the unfortunately named "Steal a Base, Steal a Taco" promotion, in which Taco Bell will give out a free taco to all comers after a base is stolen in the series. Apparently this happened last night -- I wasn't watching because, well, Phillies-Rays, come on -- so you can pull in to Taco Bell between 2 and 6 p.m. next Tuesday, Oct. 28, for your free grub.

But beware: You may recall that last year, voracious free taco seekers were spilling out onto the highway in their quest for the spicy (and free) delicacy. And let's face it, the economy's a lot worse this year -- don't be surprised if you see your broker in line.
Posted by Pete Chianca at 10:07 AM 2 comments:

Muppets are back video of the week

Beaker: A hero for a new generation!

Despite the candidates guide I wrote not too long ago, it seems there are some people who still have not decided who to vote for in the upcoming presidential election. I suppose this could have something to do with the candidates guide being completely made up, but in my defense, I was just following the new mainstream media motto: “The Mainstream Media: We Make Stuff Up.”

I’m told the undecided people are typically not Democrats or Republicans, who have known who to vote for since they emerged from their mother’s wombs with an innate affection for social welfare programs and tax rebates, respectively. Instead we’re talking about, at last count, about 40 uncommitted people in Ohio and/or Florida who never get asked out to dinner because they wind up just staring at the menu for hours, paralyzed. (“Darn it … I should have ordered the McGovern.”)

These are the people the candidates are truly trying to woo. Obama’s doing it by offering them change, primarily in the form of rolled quarters dumped into their driveways by Chicago teamsters. As for McCain, he’s promised to make each and every one of them vice president of the United States.

So I’m here to help make their decision a little easier by offering them a simple quiz that will determine who they should vote for. All they need to do is answer the following questions, and if they don’t know the answers, they should probably just give up and move to Finland, where they choose their leaders through Cow Pie Bingo.

Question 1: Are you a fan of change? If so, you’re in luck, since both candidates are planning to change everything they possibly can, including the drapes.

So the question then becomes, what kind of change do you like? You should vote for McCain if you like the kind of change that involves pretty much what was going on before, but coming from an older, balder person. But you should vote for Obama if you like the kind of extensive change that requires a serious commitment of time and resources, and possibly magic beans.

Question 2: Are you a maverick? You can tell if you are by whether you often order extra sugar in your iced coffee, or drive a Mini Cooper, or hang steadfastly on to your boot cut jeans in the hopes they will come back in style. If the answer is yes, you should vote for McCain, who regularly, when asked to vote with his fellow Republicans on controversial issues, strangled them to death with their own suspenders.

Question 3: Are you concerned with America’s standing in the world? If you are, you should vote for Obama, who has Joe Biden standing by to deliver edible fruit arrangements to dozens of world leaders, without preconditions.

But if you’re more of an America-first kind of guy, you should vote for McCain, who is not going to give other nations an inch, even though we owe them trillions of dollars. He’s also not going to make out with the leaders of Saudi Arabia to get their oil like Bush did, probably.

Question 4: Do you like to “shoot from the hip”? If so, you should vote for McCain, who’s always doing spontaneous things; for instance, suspending his campaign for no reason, and choosing his vice president from the Hot Governors 2008 calendar. He’s also willing to stay in Iraq for 100 years, but has already pulled out of Michigan.

Meanwhile, if anyone has ever asked you if you have a pole stuck in any of your bodily orifices, Obama is your man.

Question 5: Do you like celebrities? Then you should definitely vote for Obama, who has promised a cabinet made up of Oprah, Barbra Streisand, Bruce Springsteen, Leonardo DiCaprio and the original Broadway cast of “The Wiz.”

Of course, if your main goal is just to have somebody who wants what’s best for America, whether that person is belligerent and doddering or has the executive experience of a turnip, then the most important thing is simply that you vote for somebody.

But if you want to know who to vote for in Finland, I’m stumped. You’ll have to ask the cow.

To receive At Large by e-mail, write to info@chianca-at-large.com, with the subject line “SUBSCRIBE.”
Posted by Pete Chianca at 10:00 PM 8 comments:

If you were paying any attention at all in the '80s, you will find this "literal version" of Ah-ha's "Take On Me" video absolutely hilarious:

Remember back when a song could be a hit based almost solely on its video? I'd argue that this song would fall into that category -- who knows what it's even about, but no one ever forgets that crazy black and white comic book guy. It's the best 1980s cartoon video ever, with the possible exception of this one:

Posted by Pete Chianca at 11:02 PM No comments:

If the next series has them all playing shuffleboard, count me in

For some reason I find these paintings by artist Andy Thomas fascinating: 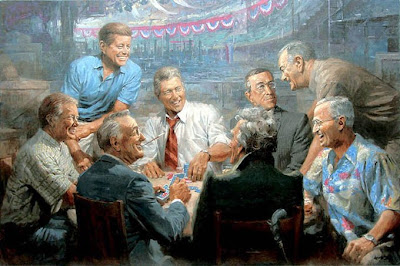 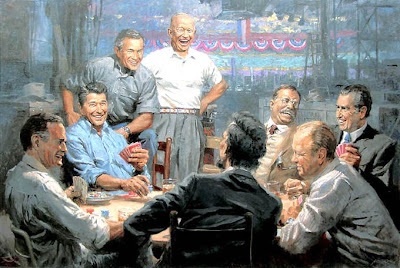 It gets the brain reeling to think about what would happen could these scenarios actually exist in real life. A few things come to mind: