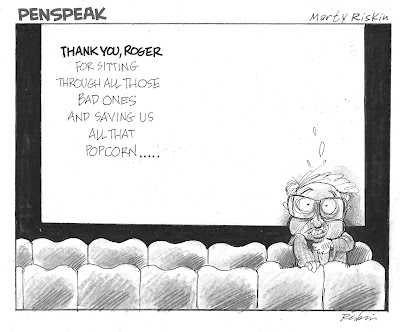 Reading about bad movies should not be this melancholy an experience.

After all, the whole point of reading Roger Ebert's collections of zero- to two-star reviews is to revel in the ineptitude (“The Last Airbender”), the excess (“Battle: Los Angeles”), the sheer, well, BADNESS (“Basic Instinct 2,” pretty much anything featuring Adam Sandler) of the cinematic misfires catalogued therein.
He's published three: "I Hated Hated Hated This Movie," the more succinctly titled  "Your Movie Sucks," and his latest -- the one I’m working through now -- "A Horrible Experience of Unbearable Length.”

Of course, this latest volume has a sad distinction the other two didn’t, in that it's his last. As you probably know, Ebert passed away April 4 -- eerily enough, about a week after I ordered the book, and just a day before it arrived in my mailbox.

For a while, I’ll admit I avoided opening it. I’ve read most of Ebert’s books -- from his early collections to his “Great Movies” series to his fantastic memoir “Life Itself” -- and I couldn’t stand the idea of there not being another to add to my shelf after I finished this one. But I could resist for only so long, and less than halfway through it I’ve already found myself LOL-ing over lines like these:

“All About Steve”: “How does [Sandra Bullock] choose her material? If she does it herself, she needs an agent. If it’s done by an agent, she needs to do it herself.”

“Footloose”: “The film’s message is this: A bad movie, if faithfully remade, will produce another bad movie.”

“Hatchet II”: “Tickets are not cheap and time is fleeting. Why would you choose this one? That’s a good topic for a long, thoughtful talk with yourself in the mirror.”

Even as much as I’ve loved Ebert’s work, I had no intention of writing a tribute to him -- plenty of other, better writers (and a few worse ones) did that soon after he passed. But as I’ve been reading this last collection, it’s had me rethinking what’s drawn me to his writing over the years.

Like everybody else who wasn’t a reader of the Chicago Sun-Times, I first discovered Ebert on television -- I actually watched him on PBS as a kid, when he and Gene Siskel would sometimes discuss a single movie for 10 minutes, and there always seemed to be a very real risk (hope?) that they would finally come to blows. By the time they were following David Letterman around suburban neighborhoods on “Late Night,” “Siskel & Ebert” seemed more like TV characters than critics.


But like a lot of other Ebert fans, I eventually came around to his writing -- and could he ever write. His reviews weren’t Film Quarterly think pieces, typed a few lines at a time in between thoughtful stares out the window and sips of mineral water: They were tight epistles written on a daily deadline, which made their insight and wit all the more impressive.

And it’s true there were a lot of movies he didn’t like -- but his reviews of those films weren’t nasty, even if some people went about collecting “Ebert’s meanest reviews” after he died. Instead, his incredulous plot-skewerings and sardonic observations were more like a tribute to the good movies stuck inside those bad ones, struggling to get out. (Well, maybe not “Hatchet II,” but the other ones.)

What I’m realizing now more than ever is that Ebert knew that movies could be trenchant, transcendent, even life-changing -- like any number of the subjects of his “Great Movies” essays, from “Casablanca” to “Vertigo” to “Taxi Driver.” So movies that lazily squandered their opportunity to even try to reach those heights made him downright angry -- and made him feel like if the movie refused to entertain, he would at least make sure his review did.

In fact, given his pure love of the craft, it’s hard not to appreciate the sacrifice he went through: suffering through enough bad movies to fill three volumes, so we didn’t have to.

And for that, I felt a need to offer my belated thanks. I’ll probably never see most of the movies in "A Horrible Experience of Unbearable Length,” but I’ll likely want to pull the book from my shelf through the years and read the reviews again, and again. Though he may be gone, Roger’s reviews of films both good and bad -- thanks to his uncanny ability to tap directly into the heart of how movies can move us, and how we feel on those occasions when they don’t -- will never get old.

Unfortunately, you can’t say the same about “Footloose.” (Either version.)

Posted by Pete Chianca at 6:01 PM No comments:

It seems that Frank Turner is feeling a little run-down these days.

Not that you’d know from his music -- his explosion of folk-punk and salty balladry is as fresh and expressive as ever. But on his new album “Tape Deck Heart” (Interscope), his lyrics are rife with allusions to personal scars both emotional and literal, a cocktail of frustration, desperation and scorching defiance that makes for one of his most pungent collections to date.

The rough-and-tumble odes to love and country on Turner’s last disc, 2011’s “England Keep My Bones,” seemed almost regal in comparison to the loud but downtrodden laments on "Tape Deck Heart.” “I’ve been dipping in my darkness for serotonin boosters, cider and some kind of smelling salts,” shouts the emotionally ailing narrator of “Recovery,” and it’s the winding trip down the “long road out to recovery from here” that provides the album’s backbone.

Turner’s always at his best when marrying punk sensibility with folk melodies, and these tracks are no exception. On “Four Simple Words,” the album’s nod to rock ’n’ roll salvation, music hall piano gives way to full-out punk frenzy as he dismisses fair-weather rock fans: “If the hipsters move on why should I give a f--?” he asks, and who can argue?

In fact, there seems to be a new resignation in the profanity of “Tape Deck Heart”: “Plain Sailing Weather” is another driving shouter in which Turner simultaneously brags and laments his ability to “f-- up anything,” and the F-bombs also fly in the folky lost-opportunity ballad “Good & Gone,” landing squarely on Hollywood (and, oddly, Motley Crue) for promoting false expectations among dreamers.

Turner’s ire and melancholy is mostly reserved, though, for the women, past and present, who’ve abandoned him, let him down or otherwise slipped out the back: the nameless girl of “The Way I Tend To Be” whose perfume he detects in a crowded space; Amy on “Tell Tale Signs,” who’s taken to task for the scars she’s left and for refusing to grow up; his fellow “sinking ship” on the wistful “Anymore,” whom he’s finally gotten the nerve to tell how he doesn’t feel.

All of this makes “Tape Deck Heart” sound like a downer, and it does have its tough moments. But something about Turner’s spirited delivery and anthemic arrangements pushes it, finally, into the realm of the hopeful.

To paraphrase one of his earlier songs, Turner still believes in the healing power of rock ’n’ roll, old friends and even true love, if you’re lucky enough to track it down. Being able to follow him on his rough and rambling search for it is a tonic in and of itself.
Posted by Pete Chianca at 6:43 AM No comments: