Massachusetts State Rock Song: Why does no one ask us about these things?

It’s a controversy the likes of which we haven’t seen since the debate over the official Massachusetts donut (Boston Crème, duh): Legislators are grappling over what classic ditty should be crowed the state’s Official Rock Song. How we’ve lived without one this long I’m not sure.


On the plus side, the song includes a fair number of local references and declares, “I’m in love with Massachusetts.” On the other hand, the only people who actually know this song are that small subset of rock fans who were listening to WBCN in the summer of 1976 and weren’t so high that they’ve since forgotten everything they heard.


The reps cite how it was written by “Marshfield resident Steven Tyler,” but it’s worth noting that Tyler (nee Steven Tallerico) is actually … brace yourselves … a native New Yorker. (I know because my aunt went to high school with him in Yonkers. No, seriously.) Can we really have a state song written and sung by someone who grew up a Yankee fan? Also, when he sings “Dream on, dream on, dream on” at the end, windshields have been known to crack.

The other problem with these picks is they display a clear south- (and southwest-) of Boston bias. Where’s the North Shore love? It’s time one of our local legislators jumped into the fray, and I have the perfect song to do it with: “Rock and Roll Band” by Boston. I lay out the argument here:

So listen up, candidates in the April 2 special election for Peabody’s new state rep: Better make this your first order of business, before the state loses its ability to rock!

Posted by Pete Chianca at 2:47 PM No comments:

Column: Putting the 'do' back in doo-wop 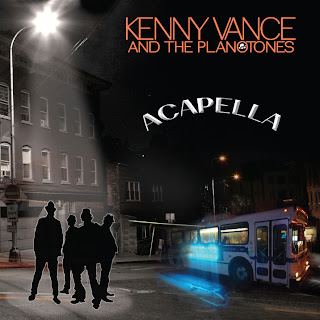 Hear ye, hear ye! I come in praise of the sh-booms! The shu-wops! The bom-diddy-boms! The ring-a-dong-dings! (Well, not so much that last one, but all those others.) I’m talking about doo-wop, that marriage of R&B and early rock ’n’ roll that started on city street corners in the 1950s and had doo-wah-diddied its way into the oldies bins by the time the Beatles got here.

I was reminded of my longtime romance with doo-wop by “Acapella,” the new album by Kenny Vance and the Planotones, which showed up in my inbox earlier this month. Vance, a founding member of Jay & The Americans, is clearly a man on a mission: He’s recorded some of these classics before, but never sans instruments, and his sheer love and appreciation for the songs is palpable — from the first bom-bom-bom of The Cadillacs’ “Zoom” to the last “wee-hee-eee” of the Flamingos’ gorgeous “I’ll Be Home.”

In between, Vance and his group go deep on oldies that most people probably haven’t heard unless they’re among the group that popped the originals onto their turntables 50-plus years ago.

“I felt like it was time to do a tribute to the days when we started,” Vance says, and on “Acapella” he nails numbers by such long-forgotten groups as The Charades, The Collegians and The Paragons (not to be confused with The Paradons, who are also represented here with a silky-smooth version of their one hit, “Diamonds and Pearls”).

Even though I’m not part of the demographic who heard these songs their first time around — KISS, Queen and Foreigner were on my school-bus soundtrack — I’ve had a soft spot for doo-wop as long as I can remember. And for that I have to credit my father, who was growing up in the Bronx when Dion DiMucci was just a guy from the neighborhood, not the frontman for The Belmonts.

To hear my dad tell it, pretty much any group of guys with the inclination could (and would) gather on the street corner and form a doo-wop group. He even recalls doing a doo-wop competition with his sister and two friends at Mt. Carmel Church Hall in the Bronx, a gig that he thought went well until the other groups got up — all of them made up of “black kids who sounded like they should have been on the radio,” my dad recalls, laughing. “We didn’t even stay for the rest of the contest.”

Even if his doo-wop career stalled by high school, though, he retained a love of the music that ensured a steady diet of oldies on our family stereo: WCBS-FM in New York was in its heyday, and Sunday nights featured “The Doo Wop Shop with Don K. Reed,” played every week in its entirety in our living room.

Even as a kid, there was something that struck me in songs like the Five Satins’ “In The Still of the Night” and Vito & the Salutations’ souped-up version of “Unchained Melody.” First and foremost were of course the tight-knit arrangements of nonsense syllables that made up the backbone of every track. Beyond that, though, was the way the songs captured the simple joy of a bunch of guys singing in a tiny studio (or possibly a bathroom) — the production was simple and the lyrics were almost always of the you-true-blue variety, but that was part of the charm.

“Acapella” is certainly slicker than any of those early records, but Vance — who at 69 somehow manages high notes and harmonies that would be impressive for someone a third that age — captures their heart and soul. True to the originals but not slavishly so, The Planotones imbue songs like the rollicking “Zoom Zoom Zoom” and the smoky “Mio Amore” with sparkling, vibrant personality.

Vance also somehow avoids the Lite-FM vibe of a Manhattan Transfer or the college a cappella group smarm that can neuter these songs’ street-corner grittiness. Don’t take my word for it, though — here’s what my father, the erstwhile doo-wopper, had to say after a few spins through “Acapella”:

“As someone who’s familiar with most of the original renditions of these songs, I tend to be disappointed when they’re covered by another group,” he admits. “With this album, I found I enjoyed some of the songs just as much as the originals.” When the doo-wop is this good, he points out, you don’t miss the instruments.

Dad’s favorite from “Acapella” is “You Cheated,” which he describes as “unbelievably true” to the 1958 original by The Shields. But the whole package, every track, is true to the doo-wop spirit that helped fuel early rock ’n’ roll: Close your eyes and you may even find yourself back shu-bopping on a Belmont Avenue street corner — whether or not you were there in the first place.
Posted by Pete Chianca at 7:00 AM No comments: