If you're very quiet, you may
be able to hear them bickering 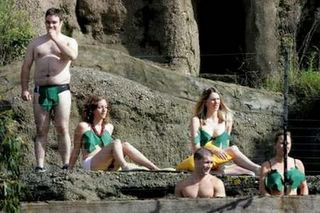 Memo to guy on left: Cut down on the nuts and berries, pal.

Hey, where was I when they posted this ad? It seems the London Zoo, following an exhaustive Internet search for volunteers, has opened an exhibit called "Human Zoo," which is meant to show the "basic nature of human beings." And apparently our basic nature is to sit around all day in our underwear. To think, all this time I thought that was just the men part of the human beings.

Yes, the exhibit features scantily clad people sitting around in their natural habitat: a bunch of rocks. This is a good start, but it seems to me it would have made more sense to place them in cubicles and in front of Xerox machines. Ten to one they would be willing to do little tricks for coffee and crullers.

Anyway, some might say this is demeaning, but I say, it will make us all the more prepared when the aliens come to gather us up for display on their freakish homeworlds. Or eat us.

(Thanks to Digital Doorway.)

I'd so put that guy to shame...interested ladies feel free to hit me up.

Thanks. I needed that laugh.

Here via BlogExplosion...I heard about this and thought "WTF????" I don't know what they are thinking!

I thought Survivor, Big Brother and all the other similar reality tv shows were already a good example of a human zoo.

That is funny about preparing for the aliens, I hope they don't eat us ;)

now that's something their grandchildren can be proud of.

"did you own your own business or change the world via greenpeace, grandma?"

"why, no, honey, but i posed in a fig leaf bikini at the zoo once."

Adama & Eva and offspring! Man oh man, people will do anything for money these days. I REALLY hope these guys and gals are getting paid! With real money! lol

haw-haw! Imagine the wedgies from those things. Ouchy!


For the record, I did that once. Unfortunately it was Poison Ivy and I still have the remnants of a wicked rash.

PS I don't have a problem with this except uh well do they just poop on themselves? or what?

On this day, my birthday
As for myself, I celebrated this morning at breakfast with the family since I have a dinner with clients tonight.
Terrific Gifts for Spring and Summer. Many Styles! Shop from our VAST COLLECTION of Handbags today! discount gucci handbag

"In your cage, at the human zoo, they all stop to look at you.

Next year, what will you do, when you have been forgotten!" ~ Styx "Miss America". ;~D

I wonder what the big deal about this is, aren't our red light districts filled with bars that have humans on display?

I wonder if you these people let you put dollars in their fig leaves. ;~D

We won't eat you.

You’re the best! Thanks!

I'm going for a cruller now...see if I get one of them to jump through a hoop...oh wait, that's real life - LOL

Peter, looks like you need to activate that new-fangled word verification feature)

Wow, people standing around doing nothing - you don't see that ever.

Oh, and Please Do Not Feed the Humans.