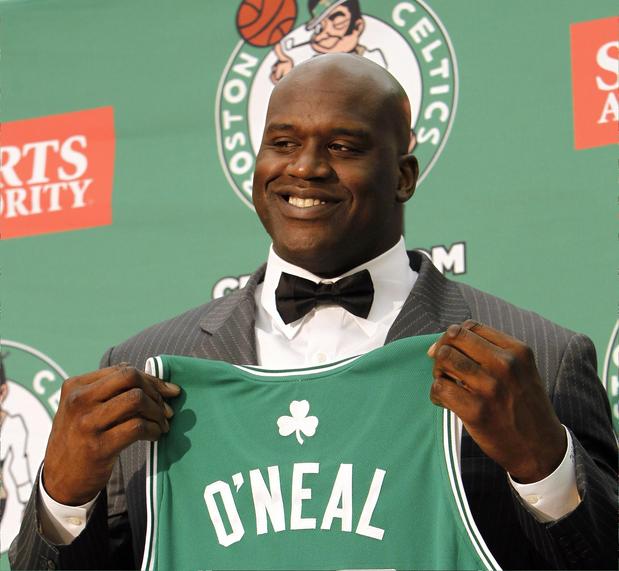 1) Shaq. Have Boston and a slightly faded superstar ever embraced each other so enthusiastically? (Ben Affleck doesn’t count; he was born here.) Shaq has played for such teams as the Miami Heat, the — gag! — L.A. Lakers and the Cleveland Cavaliers. But now he’s a Celtic, and it seems this is what Shaq was always supposed to be. Well, besides being a Comcast spokesman with the guy who said “Bueller?”

2) Theo. Last year, it looked like Theo Epstein had gone off the rails, declaring the upcoming season a “bridge year” and signing an odd mélange of players who didn’t exactly have people running to buy the new jerseys. But this year, with Carl Crawford and Adrian Gonzalez wrapped up, he’s back to being the (36-year-old) boy genius. Unless, of course, the Sox don’t win the World Series next season — come on, it’s been four years, we’re getting antsy!

3) No-hitters. Is it us, or have these gotten easier? Maybe all those steroids wearing off have left the batters atrophied or partially blind or brain-addled. (Or all three.) Steroids are out.

Umpires, too, are in, except for the ones who blew calls over and over again in 2010, including the one who denied Armando Galarraga his perfect game. What? That’s all of them? OK, then: They’re ouuuuuuut!

4) Taking your shirt off and painting yourself your team colors. This never gets old.

5) Soccer. In the wake of the World Cup drama, this was the year soccer finally captured the hearts and minds of the American sports-viewing public, taking its place beside football and baseball as one of the most engrossing, captivating … Oh, who am I kidding? Soccer is still out. But vuvuzelas are in!

1) LeBron. Shaq is on top of the world, but the other big-name sports move hasn’t worked out quite as well. We’re talking to you, King James. LeBron’s “I’m taking my talents to South Beach” TV special was an unprecedented, self-made public relations disaster. The only thing that could have made it worse is if he ended it by opening Al Capone’s vault.

2) Upstanding All-American quarterbacks. Whether they’re serving probation for dog fighting (Michael Vick), on suspension for alleged sexual assault (Ben Roethlisberger) or texting their junk to anyone and everyone (Brett Favre and presumably almost everybody else in the NFL), quarterbacks are not looking good right now. Except for Tom Brady, of course, who is still a great American role model and Ugg spokesman, not necessarily in that order.

3) Red Sox “new” faces. Ah, Victor Martinez and Adrian Beltre, we hardly knew ye. They became welcome fixtures after the Red Sox suffered more injuries than the cast of the Spider-Man musical, but as Theo puts together his newest would-be championship squad, they’ve been sent out of town. Sad but necessary, since being out of the playoffs — or not getting into them in the first place — is definitely out. (The Spider-Man musical: also out.)

4) Randy Moss. If there’s any major sports figure who had a greater “My God, what have I done?” moment than LeBron, it’s poor Randy, who at last blush was playing for … wait, let me check … ah, right, the Tennessee Titans. Maybe he’ll come back to the Patriots some day, if he ever starts catching balls again. Naaaaaaaaah.

5) Golf. That’s right, Tiger Woods didn’t just ruin his marriage, he took an entire sport with him. Men can’t even play the Tiger Woods videogames anymore without getting glares from their wives and girlfriends. Maybe Tiger should try a new endeavor … I’m thinking NFL quarterback.

TOMORROW: In and Out in Lifestyles

Email ThisBlogThis!Share to TwitterShare to FacebookShare to Pinterest
Labels: In and Out, Sports