COLUMN: You’ll be thankful you read this 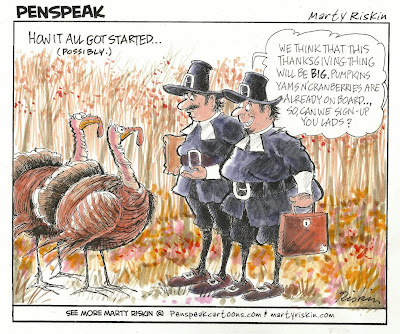 As you may recall, around this time each year I like to take a moment to remind my readers that there are still plenty of reasons to be truly thankful. I do that so people will be able to put these often difficult times into perspective, and also to get them to come out from under the bed.

So stick your head out and take a gander at these, this year’s reasons to give thanks:

1) You didn’t have to run against a Republican in the mid-term elections. Or if you did you probably had to do it in Massachusetts, where the number of Republicans in the state Senate can now officially fit into a phone booth. Whatever that was.

2) You have universal health care now, sort of.

3) There’s an app for that, as long as “that” isn’t “magically generating the extra 600 bucks you’d need to buy an iPad.”

4) When something goes wrong at work, you don’t have to wait 69 days to be extricated through a tube. No matter how often it may feel that way.

5) You’re not covered in oil, or if you are, it’s probably just a lifestyle choice.

6) You didn’t have to run against Scott Brown. Or his truck. Or his barn jacket. Or his rugged, manly good looks. Not that I’m looking at his Cosmo spread right now or anything.

8) Your personal assistant didn’t write a tell-all book about you, your lover and the illegitimate child you fathered when you were running for president. Heck, you probably don’t even have a personal assistant.

9) You haven’t turned up on “Sarah Palin’s Alaska,” where there’s a good chance you would have been eaten by a bear, or Sarah Palin.

10) You weren’t poisoned by Lady Gaga in her “Telephone” video, and you probably had very little exposure to police tape, and even if you did you most likely weren’t wearing it over your privates.

14) The last time you answered an ad on Craigslist, nobody killed you, probably.

15) Your husband didn’t admit to canoodling with a tattooed skank. Or if he did, at least it wasn’t right after you won your Oscar.

16) You’re completely incapable of pitching a perfect game. After all, with your luck it would have been officiated by that umpire in Detroit, or the shot Roger Clemens gave you in your butt would have worn off in the bottom of the eighth.

17) You didn’t try to get in to the new Harry Potter theme park, unless you did, in which case you’re still there waiting in line, trying to gain sustenance by sucking the condensation off the end of your plastic wand.

18) You haven’t received any text messages from Brett Favre. (And if you have … for God’s sake, delete them!)

19) The Old Spice Guy beat up a pirate piñata with a petrified freshwater fish while saying your name. Wait, sorry … that was Demi Moore. But I’m sure the Old Spice Guy would have done that for you, had he known you.

20) No one threatened to burn anything of yours, or if they did, they probably didn’t go through with it.

22) If you’re staying at a hotel right now, Charlie Sheen is probably nowhere in the vicinity. You can come out from under the bed now.

This column appeared originally in North Shore Sunday. Peter Chianca is a managing editor for GateHouse Media New England. Follow him on Twitter at twitter.com/pchianca. To receive At Large by e-mail, write to info@chianca-at-large.com, with the subject line “SUBSCRIBE.”