COLUMN: So what's up with Thanksgiving? 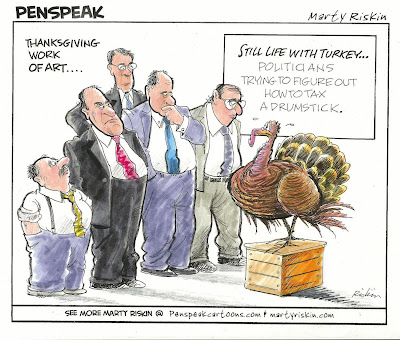 It’s time once again for “Mr. Holiday” to answer your holiday queries. This week: Thanksgiving.

Dear Mr. Holiday:
I understand that the People for the Ethical Treatment of Animals want us to give up eating turkey on Thanksgiving. But I love turkey! Juicy, succulent, recently deceased turkey. What should I do?

Dear Hungry:
PETA is a very well-meaning organization, in that same way that your crazy uncle who thinks he’s a founding member of ABBA is well-meaning. But mostly they’re just looking for an excuse to parade around naked and get arrested.

In reality, studies have shown that Thanksgiving turkeys are remarkably well treated. They run free on spacious turkey farms, relaxing in little turkey saunas and smoking rich little full-bodied turkey cigars. Then they’re slaughtered and plucked, but in a well-treated kind of way.

What you should be really concerned about is the rampant, horrible mistreatment of soy.

Dear Mr. Holiday:
I dread Thanksgiving — sitting around with my family is so boring! Any suggestions?

Dear Bored:
You seem to have forgotten that Thanksgiving is one of the only chances your entire family gets to sit down together in a meaningful way. With that in mind, here are some topics you may want to consider to liven up the meal:

· How years of browbeating have driven you to therapy;

· The fact that just because you can’t get through a family occasion without downing an entire bottle of muscatel doesn’t mean you’re an alcoholic;

· That you’ve blown the grandkids’ inheritance on Keno.

Dear Curious:
It takes dozens of people to control one of those balloons, and in a stiff wind they can actually become quite dangerous. No wait, I’m thinking of Willard Scott.

Dear Mr. Holiday:
What are “giblets”?

Dear Cooking:
No one knows.

Dear Mr. Holiday:
I love finishing a huge Thanksgiving meal, heading straight into the living room, loosening my belt and watching football for the rest of the day as the stuffing congeals in my stomach cavity. But recently I began wondering: What are all the women talking about back in the kitchen while the guys watch football?

Dear Suspicious:
This is one of the great mysteries of Thanksgiving. But I’m sure it’s not how they can’t believe they have to wake up every morning next to the likes of your fat, lazy self. They’re probably just comparing recipes.

Dear Mr. Holiday:
I was horrified recently to discover that the first Thanksgiving dinner was nothing like the Thanksgiving we have today. Is it really possible that the Pilgrims and Indians didn’t really have turkey and pumpkin pie?

Dear Disillusioned:
Don’t worry your pretty little head off — of course the Pilgrims and Indians had turkey and pumpkin pie! Just like Columbus was a brave and gallant explorer rather than the harbinger of genocide and slavery to a proud indigenous people. Six of one, half-dozen of the other, I always say.

Granted, historians say the menu was probably more likely to include things like lobsters, mussels, grapes, plums and flint corn. However, some traditions have carried on: For instance, a Pilgrim woman named Constance Britteridge was credited with creating a delightful fruit centerpiece for the meal, based on a first-century fresco from Pompeii. Then she was arrested for securities fraud.

Dear Mr. Holiday:
What are you thankful for this Thanksgiving?

Dear Grateful:
I’m thankful mostly for loyal, caring readers like you. No wait, I meant to say giblets.

Peter Chianca is a managing editor for GateHouse Media New England. He’s currently out shopping for giblets; his “Best of Chianca” column is from 2005. Follow him on Twitter at twitter.com/pchianca.

I hope you and your family have a wonderful Thanksgiving! I am so grateful for your friendship!