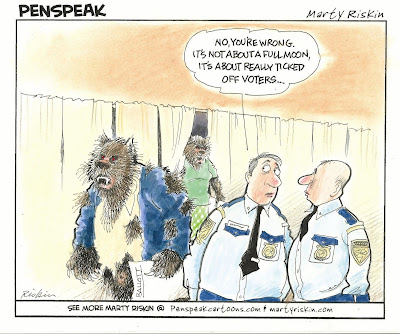 Editor’s note: Due to press deadlines, our reporter had to write the following election roundup before the election actually took place. We apologize in advance if there are any discrepancies.

As predicted, Republicans made an unprecedented sweep into office on Tuesday, sending what GOP leaders called “an important message” to President Barack Obama from the American people: that when they elected him based on his promise to enact healthcare reform, pass sweeping financial regulations and avert another Great Depression, they were just kidding.

“What we really wanted was for him not to raise taxes!” said Fred Hertmeyer of Glenbeulah, Wisc., who said he voted for every Tea Party candidate he could find. When told that Obama has actually lowered taxes during his first two years in office, Hertmeyer slapped his forehead and ran back to the Glenbeulah Junior High School to change his vote, but the elderly women who ran the polls had long since gone home.

New Speaker of the House John Boehner declared the GOP victory to be a repudiation of Obama’s policies, as well as “sweet revenge” against all the kids in middle school who used to call him “Johnny Boner.” Reached at her office Wednesday morning, former Speaker Nancy Pelosi disagreed with Boehner’s assessment, saying, “Look what you’ve done! I’m melting! Melting! Oh, what a world! What a world!” and then disappearing into a pile of mush under her desk.

The Republican majorities, meanwhile, immediately set about preserving the so-called Bush tax cuts, along with $1 billion in new tax cuts to help private industry finance the spontaneous, massive block parties that broke out on Wall Street and at insurance and credit card companies across the country with news of the GOP victories.

“Don’t worry, all that wealth should start trickling down any time now,” said Boehner, pausing to look at his watch. “Just you wait,” he added, tapping several times on his knee and looking uncomfortably around the room. Then, after another minute or so had passed, he pointed and yelled, “Look! Bill Clinton!” and slipped out the back door while everyone’s back was turned.

Prospective 2012 presidential hopeful Sarah Palin said she was “extastic” about the results and took credit for the fact that every candidate she endorsed won easily. She did admit, however, that she didn’t actually cast a ballot for any of them, having accidentally attempted to vote at an ATM machine. Meanwhile, one of her protégés, newly elected Sen. Christine O’Donnell of Delaware, has already filed a bill that would require people to start referring to sex by whispering “s-e-x,” and another that would turn the media into newts.

Here in Massachusetts, gubernatorial candidate Tim Cahill — who ran as an independent, even though he was a lifelong Democrat — squeaked into office ahead of Gov. Deval Patrick and GOP challenger Charlie Baker, with exit polls showing that most voters had mistaken Cahill for “None of the Above.”

“We’ll take it however we can get it,” said Cahill, who then pulled of his rubber mask, revealing himself to actually be Michael Dukakis.

In another surprise here in the Bay State, the controversial Question 3, to roll the sales tax back from 6.25 to 3 percent, passed by a wide margin. The next day, thousands of teachers, police, firefighters and prosecutors lost their jobs, and the rest of society was eaten by zombies.

This column ran originally at Wicked Local North of Boston. Follow Peter Chianca on Twitter at twitter.com/pchianca. To receive At Large by e-mail, write to info@chianca-at-large.com, with the subject line “SUBSCRIBE.”

be carful what you wish for.....you might get it