COLUMN: Something to fall back on 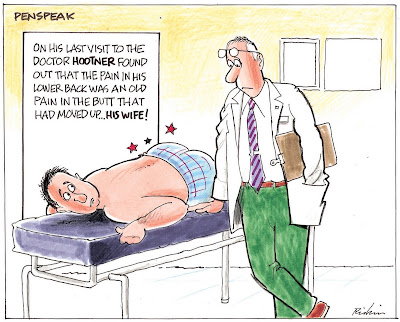 I recently discovered the only thing more humiliating than throwing your back out while candlepin bowling; namely, throwing your back out while taking off your candlepin bowling shoes. I managed to do this despite the fact that billions of people manage to remove shoes every day without serious injury, many of them more than once. Just ask Mr. Rogers.

The day was going so well, too — I had even bowled a personal best, coming close to breaking 100 thanks to resourceful use of the bumpers. Then I leaned over to take off the shoes and I felt it — the muscles in my lower back giving way like failing cantilevers on an uninspected bridge.

I tried to put a good face on it for my kids and our companions until I managed to hobble back out to the car, but it wasn’t easy, given that my upper body was suddenly at a 90 degree angle from my legs — I looked like I’d just stopped in to bowl a quick string on the way to my bell tower.

Unfortunately, situations like these aren’t especially unusual for me; a couple times a year my back decides I’m getting a little too cocky and decides to show me who’s boss. And never when I’m doing something manly like moving furniture or lifting floor joists into place — although in my defense, who knew I should have made it a point to always bend my knees when I sneezed?

Given that, you’d think I’d be prepared for the occasional bout with back pain. Yet somehow I’ve never gotten around to buying a cold pack or a heating pad — and trust me, there are few things more pathetic than a grown man sprawled on the couch with frozen vegetables down the back of his pants. (Most doctors recommend 20 minutes corn, 20 minutes peas.)

However, I won’t deny that there are certain mitigating factors that make back problems more bearable. For instance:

1.) The drugs. These are a miracle of modern science, but I should point out that I in no way advocate the regular use of painkillers. Unless you have access to the really good stuff, like the ones Matthew Perry had.

2.) Guilt-free TV watching. For instance, when my back went out this last time I finally got to sit and watch “Superman Returns,” which I thought was actually pretty good. Of course, given the drugs I had taken, who knows if it was actually the movie I thought it was; I’m lucky I didn’t wind up wandering the streets like Margot Kidder.

3.) No one can blame you for not washing dishes. Not that I wash many dishes to begin with, but the chance of it is always hanging out there for the able bodied.

As for the negatives, let’s see … ah yes, that would be the excruciating pain.

This last bout was bad enough to land me at the chiropractor, where he determined that my body was so out of whack that one leg was actually measuring quite a bit shorter than the other one. This might have come as a shock had he not presented it to me so professionally; for instance, not once did he call me “stumpy.” But the great thing about going to the chiropractor is that one minute you have terrible back pain, and he works his magic, and voila! — it’s gone just a few short months later.

But what’s behind my bouts with backaches? Part of it is genetic — catch us at the right moment and some of my family reunions look like a convention of Tim Conway impersonators.


But a lack of regular back exercise probably doesn’t help, along with an expanding midsection that might be throwing off my alignment, like one of those action figures that you can’t get to stand up because its head is too big. So it may be time for a change: A better diet, and maybe some regular exercises to strengthen my back muscles.

I’ll get on those as soon as I finish giving up sneezing.

Peter Chianca is a managing editor for GateHouse Media New England. He’s away from his desk right now; this column is from 2007. Follow him on Twitter at twitter.com/pchianca.

I thought you were going to show this classic Tim Conway clip: