To really pay tribute to the
cows, eat at least five pints 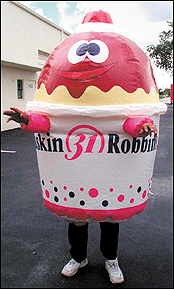 If ice cream could be turned into a living-dead
zombie, it would probably look something like this.


Ah, summertime — when a young man’s fancy turns to thoughts of eating. A young woman’s too. Basically, I'm referring to anybody willing to scarf a pound of fried scallops and wash it down with a pint of ice cream, which in the winter would be considered self-abuse but in the summer is just part of the seasonal fun, like exposing your pasty white skin to intense UV radiation.

If you don’t believe me, just stop in at your local Ben & Jerry’s ice cream, which is sponsoring “Cow Appreciation Day.” And what better way to appreciate a cow than to eat one on a sesame seed bun? Ha ha! I jest of course. The best way (say B&J) is to ingest ice cream made with milk from cows who have not been injected with synthetic growth hormones. (Particularly ice cream with names like “The Gobfather,” “Fossil Fuel” and “Appley Ever After.” So much for vanilla.) I'm sure the ice cream will taste that much better given the lack of artificial hormones, but it's worth noting, it still came out of a cow.

Meanwhile, over at Baskin Robbins (where I suspect nobody’s particularly concerned about synthetic growth hormones), they’re doing their annual search for a “Master Taster.” That’s right, you yourself can enter the blindfolded taste-off, wherein 10 ice cream fanatics per region test their ice cream flavor identifying skills. Presumably, the first one to declare “Hey, is this Appley Ever After?” will be forcibly ejected.

Or, you can top of your meal of grilled salmon and collared greens with a bowl of fresh strawberries and a few ounces of tasty sorbet. Ha ha! Again, jesting. Pass the fried dough.
Posted by Pete Chianca at 11:21 PM

Wouldn't we then be eating the brains of the zombie/ice cream?

I would love to be a master taster, not sure I could tell the difference between flavors or brands, but it sure would be tasty trying.

Don't even get me started on Ben & Jerry's. Ever since they sold out to corporate and corporate dropped (my heart slumps every time I say it) Wavy Gravy... well let's just say I think Rumsfeld had a hand in it somehow........

Eating Ice-cream made from milk of cow injected with hormones is very unhealthy.
Now,I can not say our-self to put in Cow's shoe for we Human are hormone hungry.That is why we intake Steroids and much more.

You are welcome to warmest corner in the world- H's CORNER.
www.hcorner.blogspot.com