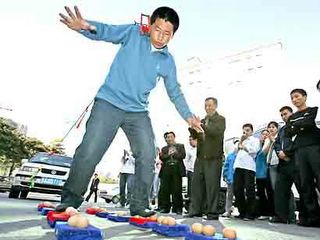 And they said I'd never amount to anything.

It's the type of headline you don't see nearly often enough in the biased liberal media: "Man pulls car with ears while standing on eggs." But if he was standing on the Koran, well, you can bet it would have made all the papers.

Luckily, we have Ananova.com, the news site that, unlike, say, the Associated Press, realizes that equal time should — nay, must — be paid to freaks and weirdoes. Thus, they’ve holed up somewhere in England, presumably with huge piles of fish and chips, and devoted themselves to reporting such actual stories as "Dieting boy ate dog's dinner."

Or the above mentioned piece about the Chinese ear-car-puller-egg-walker, which admittedly raises a few questions, such as: If you're going to attempt this, which do you master first, pulling the car with your ears, or walking on eggs? (I'm presuming trying them both at once right out of the gate could be disastrous to your ears, the eggs and the car.) Do you try out other potential car-pulling body parts first? Are the eggs raw or hard-boiled? Do people in China have more free time than we've been led to believe? Etc.

Anyway, I'm inspired. If you need me, I'll be out back with a tricycle tied to my eyelid.
Posted by Pete Chianca at 10:39 PM

This is seriously histerical. You are a funny man. I had been curious what it would look like, although I didn't look to hard. Tghanks for being funny.

This has been amusing read. I'll keep coming back. Thanks for entertaining us.

i didnt read your blog, but i didnt need to to tell that it sucked. you really should die