Column: The secret to my (future) success 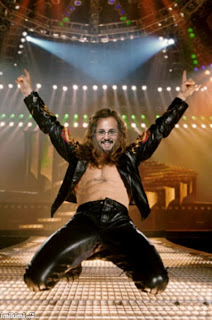 Last year I made a new year’s resolution to lose some weight, and I wound up dropping 8 pounds. So with that kind of track record, I’ve decided this year I’m going to resolve to become a spectacularly wealthy icon of material success. Wish me luck!

The first question, of course, is exactly how much success I want to attain. After giving it some thought, I’ve decided I want enough success to live a luxurious existence, but not so much that someone would want to write an unauthorized biography about me. (This means you, Madonna‘s brother.)

So then, how to do it? I’ve narrowed it down to the following four categories:

1) High finance. I used to figure this was not a good option for me, since I have no mind for business or numbers and find all those screaming men at the New York Stock Exchange to be vaguely intimidating, like those guys who yell at invisible people in the subway.

But as recent events have shown, I could probably do as good a job at this as anyone. In fact, if I had collected money from all of Bernie Madoff’s investors and did with it what I do with my own money — namely, nothing in particular — they would all be better off. Of course, they would also be better off if they had given it to one of those guys who yell at invisible people in the subway.

2) Rock star. I used to think my lack of musical ability could be an impediment here, but that was before I realized my penchant for tapping color-coded plastic buttons along with cheesy classic rock songs. Which I think is how Ted Nugent got started.

Yes, my kids got the Rock Band videogame for Christmas, and I’ve been reaping the benefits. I figure I’m going to need to parlay my Rock Band prowess into some serious cash in order to make up for scarring their young minds, as evidenced by the way my 7-year-old now walks around singing about Roxanne not having to put on her red light. I think he thinks she’s a cop.

3) Lawsuits. Surely there’s someone out there who should be paying me punitive damages. I mean, just look at me!

4) Publishing. This would seem to be a logical avenue to pursue success, since I am, ostensibly, a writer. One option would be to publish a book of my collected columns, and then keep all the unsold copies in my closet to burn in the fireplace, which would at least save me fuel money. I’m pretty sure this is what all my friends who are authors are doing.

But to achieve true publishing success I’d need a real “best seller,” ideally about one of the following topics:
I’m thinking my best bet would be to write a book incorporating all four, and then make it into a movie starring George Hamilton.

I suppose I could try to achieve my monumental success right here in the newspaper industry — except I think I’ve probably already gone as far as I can go, in that I actually have a paying job and have yet to be landed upon on my way into the newsroom by a despondent classified sales representative jumping from a higher floor.

Or rather than do any of these, I suppose I could just redefine “success” to mean a fantastic wife, some great kids, more pets than I can shake a stick at, a roof over our heads and a couple of cars that actually run. The best part about that is, I wouldn’t have to do a thing differently this year.

Although come to think of it, I could probably stand to drop another 8 pounds.

Peter Chianca is a managing editor for Gatehouse Media New England. Follow him on Twitter at twitter.com/pchianca. To receive At Large by e-mail, write to info@chianca-at-large.com, with the subject line “SUBSCRIBE.”
Posted by Pete Chianca at 10:20 PM

eToro is the #1 forex trading platform for rookie and professional traders.