Column: Meet the candidates ... If you dare! 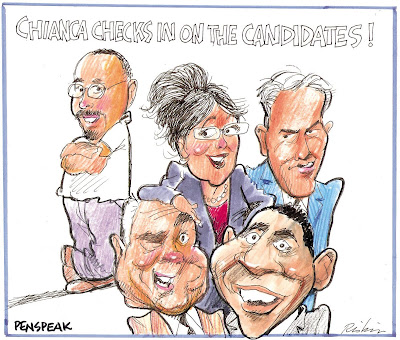 A lot of people have been asking me why I haven’t written about the presidential election, and what I tell them is, I haven’t as yet felt informed enough to do so. That’s mainly because whenever anybody starts talking about it I put my hands over my ears and start humming to myself.

But every man has a breaking point, and mine came a few weeks ago when for some reason I decided to watch large chunks of both the Democratic and Republican national conventions, leaving me with the following two conclusions:

1.) It’s a good thing they have two separate conventions, because if they shared one the Republicans would spend the entire time stealing the Democrats’ lunch money and giving them noogies right through their donkey hats.

But the other thing it made me realize is that there might be other people out there who until now have managed to tune out the election-season buzz, and who may be in need of solid information about the candidates. Those people are out of luck. However, in lieu of that you can reference the following candidates guide, which outlines almost everything you need to know.

Click here for the At Large Candidates Guide.
Posted by Pete Chianca at 5:53 PM

That was great!!!! Now that I have the unbiased and serious facts my choice will be much easier