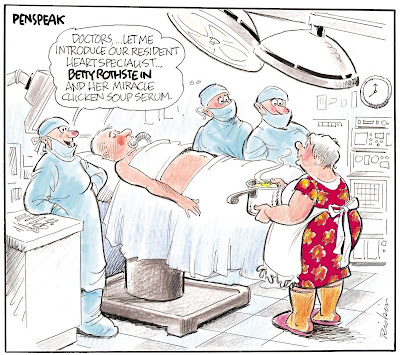 My grandmother, Betty Rothstein, passed away last week at the age of 91 1/2. For a while now she’d been admonishing pretty much anyone who would listen not to feel bad for her when she was gone; she’d had a wonderful life — “not one tragedy!” — and she was ready to go. In fact, lately she’d been wondering why she was still here — not mournfully, but sort of matter of factly, like someone wondering why her train was still sitting in the depot when it was scheduled to leave four minutes ago.

I’ve written about my late grandfather in these pages before, but not so much my grandmother — my grandfather was definitely the more colorful figure, having been a stand-up comic who shared stages with the likes of Henny Youngman in the ’40s and ’50s. My grandmother’s main claim to fame was that as a young woman she had sung on the radio, and though we never saw any evidence of this (or of any actual singing ability, for that matter), her genes are always cited whenever someone in the family actually manages to carry a tune.

My memories of her, though, center on something else: her cooking. Which may be odd, since she and my grandfather had a reputation for eating out almost incessantly. (Youngman: “My wife said she’d like to go somewhere she’s never been for our anniversary. I said, try the kitchen.”) They were constantly switching regular restaurants after the wait staffs became so familiar they’d start pulling up chairs and joining the conversation during appetizers.

But she did have her specialties: For one, she introduced me to the joys of chopped liver, which as a kid repulsed and frightened me (Agh! It’s brown!) but which eventually won a place in my heart like only a mixture of chicken livers, eggs, onions and pure rendered fat can do. It’s terrible for you, of course, except that everybody who eats it seems to live to 91 1/2.

Then there was “Aunt Didi’s Spaghetti” (although it might have been Aunt Edie’s — I was never quite sure), which was essentially spaghetti and meatballs mixed with several cans of cream of mushroom soup. Well, not “essentially” — that’s exactly what it was. I loved this meal so much that I once tried to recreate it for my roommates in college, an experiment that resulted in something that looked like a janitor should be covering it with sawdust. But they loved it once I convinced them to give it a shot. (“Eat! Eat! You’re too skinny anyway.”)

I sometimes torture my kids with tales of the snacks their “Gigi” served me when she was babysitting. Their faces become noticeably contorted as I tell them — “Why would anyone mix bananas and sour cream!” they ask, plausibly, but it turns out that anything can be good if you put enough sugar on top of it. Then there was the time she gave me a tongue sandwich — she told me it was tongue, but I just assumed that was another one of those cold cut names that didn’t really mean anything, like “salami.”

But the thing I’ll always remember about the bowls of matzo ball soup and trays of Hamentashen was that they, along with most of her interactions with us, represented the sheer joy she seemed to get from being a grandparent — “If you’re happy, I’m happy,” she would tell us, and I think she actually meant it. A smile from one of us over a bowl of soup was truly all this woman needed to be content. Although to beat Alma and Lillian at Mahjong once in a while certainly wouldn’t hurt.

The family is getting together for a memorial service this week, and afterwards we’ll be — what else? — going out to dinner. There’s a particular deli near where I grew up in New York that I’m hoping we pick, because I know they serve chopped liver, and I might just give my heart a conniption by having some in her honor.

And here’s the toast I’ll give as I hoist it off my plate: Grandma, thanks for the meals and the memories. You may have been ready to go … But that doesn’t mean we were ready for you to leave.

Sorry to hear about your grandmother.
She sounds like quite a character, and I know she will be missed.

What a beautiful tribute. She sounds like she was a lovely woman, I'm sorry for your loss.

There are certain people we wish could live forever. I hope you always find her energy surrounding you.