They promise it will be strictly softcore 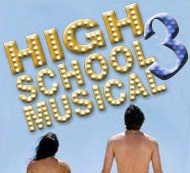 Believe it or not, I hadn't been looking especially forward to "High School Musical 3." This could have something to do with having watched "High School Musical 2," which was what I imagine it might feel like if Satan came up from the fiery pits of hell and threw balls of flaming sulfur in your eyes.

Still, if this report by the reputable news organization CAP News is any indication, volume 3 may actually be kind of interesting:

Disney CEO Bob Iger pointed out that those scenes may not make the final film, and besides, with High School Musical 3 headed for the big screen rather than Disney Channel, Disney felt a need to make it "edgier," he said. This would explain rumored plot turns such as Troy and Gabriella's steamy tryst in Troy's secret garden hideaway at East High, Sharpay's embarrassment after a nose job gone horribly wrong and Corbin Bleu's character, Chad, coming out as gay. "Like that wasn't completely obvious," said Iger.

"It's more sophisticated, but let's face it, the audience has gotten older," Iger added. "Some of them are 8 now."