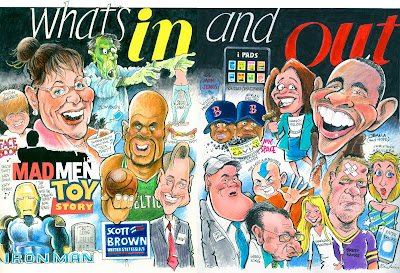 Sure, times are tough, and everybody is angry at the government, corporate America, the entertainment industry and each other. But is that any excuse for not keeping up with what’s in and out in politics, arts, culture and life in general? Of course not.

So as the year winds down, let’s put our differences aside and take a look at the things we’ve declared to be in and out in the categories of News and Politics, Entertainment, Sports and Life in the USA. Then afterwards, we’ll hug.

1) Sarah Palin and the Tea Party. Ah, Sarah Palin … Is there anything she can’t do? She survives encounters with grizzly bears on her reality show. Her daughter gets to the finals of “Dancing With The Stars.” She makes up words, and we add them into the dictionary. So what if she doesn’t know the difference between North and South Korea, wants to stifle the press and, if elected president, would probably sign a law making it legal to club liberals to death like baby seals? She’s got moxie, baby!

She’s also got major cred with the Tea Party movement, which hates profligate government spending, except for the eight years when George Bush was doing it. They’re going to take the country back from President Obama, who somehow snuck into the White House despite being the world’s first Kenyan-born socialist fascist Marxist, whatever any of those words mean.

2) Leaking. It seems only appropriate that in an age where we regurgitate every previously private fact and facet (and photo!) from our lives via our phones and computers, someone should be out there doing the same thing for the government. Sure, eventually WikiLeaks will probably release something that will threaten our national security, but it’s worth it to know (for example) that our diplomatic corps thinks that Russia’s Dmitry Medvedev “plays Robin to Putin’s Batman.” If that involves green briefs and a yellow-laced red bodice, count me in!

3) Patting and probing. Along the same lines, given the number of people broadcasting pictures of their personal, er, information via their cell phone cameras, it’s probably not surprising that most people are perfectly willing to submit to full-body scans in order to get on a plane. We’re a little nervous about the people who choose the “enhanced pat-down” option, though, particularly the ones who tip the TSA agent afterwards. Being a TSA agent is in.

4) Marriage. Marriage is in among people of all stripes and sexes, and it’s only a matter of time before any two people who love each other, in any state, can become legally bound for life. Or at least until they get tired of each other, at which time they’ll all have equal opportunity to pay attorneys exorbitant amounts to sort out who gets the furniture. Attorneys are in.

5) Ash. As in volcanic ash, which made big headlines when it grounded planes all over the world, forcing people to spend days stuck in airports, getting extra pat-downs. The good thing about the ash that erupted from the volcano under the Eyjafjallajokull glacier (or as Sarah Palin pronounces it, Eyjamacallit) is that we’re pretty sure it’s not our fault, unlike everything else up there destroying the environment and warming the planet. Not that that’s stopped Al Gore from going on the road with his “Inconvenient Volcano” PowerPoint presentation. Al Gore is out.

1) Hope. Also change. President Obama has had two whole years to reform government, get everybody jobs and health care and turn Washington into a bipartisan utopia where politicians as diametrically opposed as Nancy Pelosi and John Boehner can work together and, eventually, kiss passionately. The fact that he hasn’t is the fault of the Republicans, who have blocked the president at every turn by glaring icily at him, at which point he considers giving them a stern talking-to, and then immediately caves in. Caving in is in.

Democrats are out — out of style, out of office and generally out of sorts. Take New York Rep. Charlie Rangel, who’s looked a little queasy ever since being “censured” by Congress for ethics violations. Luckily all that money he saved not paying taxes on his rental property in the Dominican Republic can buy a lot of Pepto-Bismol.

2) Working. More and more people are opting not to work, “opting” meaning getting laid off, searching unsuccessfully for another job for 16 or 18 months and then collapsing from exhaustion. But the government will probably keep extending unemployment benefits, as long as the Republicans in Congress can verify that no one is abusing the system by actually using them.

3) War. Well, war itself isn’t out per se — we’re in at least two of them right now, I think — but talking about them certainly is. Not a single candidate made our armed conflicts an issue in the mid-term elections. That’s probably because everyone is in universal agreement about the importance of our mission in Afghanistan, whatever that is.

The troops are, of course, still in, even the ones that are out — of the closet, that is, now that “Don’t Ask, Don’t Tell” has finally been repealed. Now gay people can be just as open about it in the military as they are in other careers, like musical theater or construction.

4) Oil. It costs a fortune, it imbues our Middle Eastern adversaries (and even our allies) with unfair leverage, and when it spills, it gets all over our turtles. We might finally be at the point when we realize that oil is just not worth it and start coming up with alternative sources of energy, just as soon as someone perfects an invisible wind turbine. Having to look at wind turbines from your yacht is still out.

5) Taxes. OK, when is everybody going to get this straight: The less rich people pay in taxes; the fewer poor people there are. It’s a scientific fact, or something. So leave the rich people alone with their tax cuts and get back to looking for a job already.

Incidentally, despite coming this close to wrecking the entire world economy and plunging society into a global depression, rich people are still in. We’re still not quite sure how they pulled off.

TOMORROW: In and Out in Entertainment

Email ThisBlogThis!Share to TwitterShare to FacebookShare to Pinterest
Labels: 2010, Column, In and Out, News, Politics


great to visit your site and always had great content here keep posted top class and unaugmented material on your site people will definitely
enjoy this thanks again :