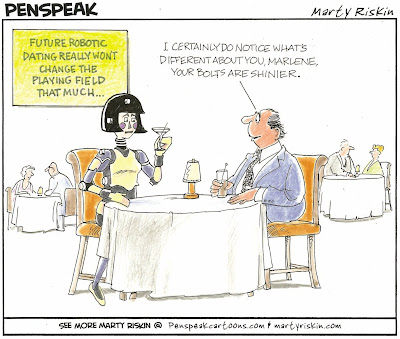 My readers are always saying to me, “Pete, why do you keep writing about robots when there is actual news going on in the world, like Paris Hilton getting arrested?” And my response is always the same: “Where did you get this number?”

But the real reason I keep writing about robots is because scientists, who have apparently never seen even a single “Terminator” movie, keep doing robot-related things that seem destined to bring about the end of humanity as we know it. It’s like they’re in some kind of twisted competition with the guys in the next lab developing the deadly strains of bacteria.

In the latest incident, researchers at the Georgia Institute of Technology have apparently come up with a robot that can convincingly lie to you. It seems robots have to be taught this behavior, unlike, say, teenagers, who do it naturally as a defense mechanism. But just because we can teach a robot to lie, does that mean we should? Isn’t that sort of like training a pit bull to distract you with gooey puppy-dog eyes right before it chews your arm off?

But the Georgia scientists apparently see a need for lying robots. For instance, they say a medical robot with a badly injured patient might need to avoid saying something thruthful that would cause the person to panic (“Sir, the possibility of you surviving this mishap is approximately 3,720 to 1,” etc.). Or a spy robot might have to deceive an enemy into thinking it’s a simple peasant girl, or a can opener.

But never fear, one of the developers told Science Daily: “Most social robots will probably rarely use deception.” Of course, that’s what they said about Paris Hilton.

I know there are those out there who think I’m just overreacting, like that time I launched a campaign to ban the word “poop.” (Turns out there are worse words your kid could be saying — who knew?) But before you dismiss my concerns, you should try doing a Google News search for “robots,” keeping in mind that doing so will automatically register you in the Google Robot database, making you one of the first people the robots round up after they mobilize.

Here are just a few recent news stories that pop up:

· The one about the $400,000 robot that can fold your laundry, even though for that price you can hire a human to do it, or even several dozen humans. You know people are upset about illegal aliens when they’re willing to pay $400,000 for a robot to do the work Americans won’t do.

· The one about the artificial “e-skin” that will allow robots to “feel,” in addition to hiding their metal endoskeleton and glowing red eyeballs from their human prey until it’s too late. I’m extrapolating a little for that last part.

· The one about newly developed robot snakes that come with flashlights and hidden cameras, which sounds fine until one is working you down its metallic gullet before ejecting you as bio-pellets.

With that in mind, I plan to keep pounding the killer robot drum until someone listens to me, or until we’re all working in forced robot labor camps, which I realize is probably more likely to happen first. (Never tell me the odds!) In the meantime, we can only hope someone actually comes up with a robot that can do something useful for humanity.

Turning Paris Hilton into bio-pellets might be a good start.