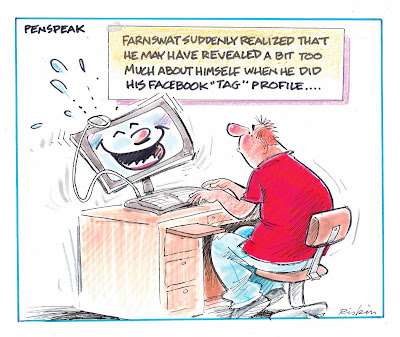 If you’re on Facebook, the social networking Web site, odds are someone has asked you to engage in the exercise where you share 25 personal facts about yourself. But I started to get concerned that maybe the practice had gone too far when I read the effort by my Facebook “friend” Freddy Frackelton of Woburn, Mass., which I reprint for you below.

Rules: Once you've been tagged, you are supposed to write a note with 25 random things, facts, habits or goals about you. If I tagged you, it's because I want to know more about you.

1. My left big toe is bigger than my right one. It might not sound like a big deal, but I think it’s starting to affect my balance. It’s either that or all the drinking.

2. I don’t know what “whist” is, and I’m too embarrassed to ask. And don’t suggest I look in the dictionary — who has that kind of time? I don’t know about you, but I work for a living.

3. I can play all 23 minutes of “Gates of Delirium” by Yes on the accordion.

4. I was the only one in my Cub Scout troop who was able to successfully field dress a deer. Unfortunately I did it during our hike at the wildlife sanctuary, which is why I never made it into Webelos.

5. I’m very close with TV’s “Law and Order” star Mariska Hargitay. In fact, if it weren’t for the restraining order I think I’d be seeing her pretty much every day.

6. When I was a child I had an imaginary friend named Pootsie whom I loved. But now she’s starting to make me nervous, because I think she may be responsible for my neighbors’ cats disappearing.

7. I own Michael Bolton’s entire recorded output. Not because I like it — I play it to try to get Pootsie to leave my apartment.

8. My great-grandfather survived the Hindenburg disaster, only to choke to death a few years later on a zeppola. Isn’t that ironic?

10. I have a recurring dream in which Rachael Ray is trying to layer me into a giant chicken taco nacho. If I ever meet her in person I’d love to tell her about it, but that’s highly unlikely because of the restraining order.

11. When I eat shellfish, my face turns red and my head blows up like a balloon. I can’t for the life of me figure out why my mother keeps sending me those Red Lobster gift cards.

12. I dabbled in nudism for a while, but mall security kept hassling me so I had to give it up.

13. I used to have Patriots season tickets, but they were rescinded — something about the way I would try to paint the other fans’ bodies whether they wanted to be blue or not. Some people have no team spirit.

14. I didn’t appreciate it at the time, but now I realize the six months I spent in juvie was one of the most productive times of my life. For instance, I learned how to kill a man with just one punch to the kidney. You know, hypothetically.

15. You know that Kevin Spacey character in “Se7en”? I don’t relate to him at all. Nuh-uh.

16. The last time I did one of these lists on Facebook, most of my “friends” wound up un-friending me. I’m afraid they didn’t realize I was just kidding about a lot of the stuff. For instance, I don’t really enjoy knitting.

Peter Chianca is a managing editor for GateHouse Media New England; this column appeared originally in North Shore Sunday. You can follow him on Twitter without risking a restraining order.

Looking for my own 25 random things? Click here.
Posted by Pete Chianca at 4:48 PM