Even though it's in Utah, he says
he'll stop at three wives, tops 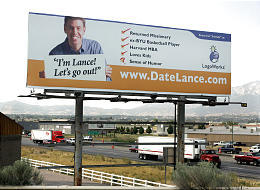 Oh sure, back when I was single all my friends said they'd help me meet somebody. "I'll set you up with my cousin, who has almost all her original teeth," they'd say. Or, "Would you like to go out with my wife's friend Marnisha -- she has two more weeks before she has to get back to the Israeli Army." Or, "I know a girl who's perfect for you; she's really, really desperate."

But for whatever reason, none of them erected a billboard in my hometown soliciting women to date me. And they called themselves my friends. Bastards.

Fortunately for Lance Archibald of Linden, Utah, his friends apparently care more for him than mine did for me. They have not only set up such a billboard, but also a Web site -- www.datelance.com -- to attract women for their 31-year-old and yet somehow unmarried buddy. Now, that's what I call friendship. No, I'm not crying ... There's just something in my eye.

Strange coinceidence...I just walked down to my computer shaking my head at this very story that I just watched on the news. I also think its funny you heard about it in Massachusetts before I heard about it here in American Fork, UT...5 minutes from the spot on the highway where the billboard is. Note to self...get out more!

In Utah, this type of billboard is usually reserved for "will you marry me" not "will you date me!" lol

"Anyone who is over 30 and unmarried is a menace to society"~~ Brigham Young. ;~D

So a billboard...my friends try hooking me up and for the past few months I've been rejected for every reason on 22 yr old male can imagine...I'm white, not black for example and also my personal favorite, my artwork I think does it too...but yeah, billboard...I'm so going to try that and get no where quick...does anyone have an ad for those wonderful Russian Mail Ordered Brides, I hear good things about women that desperate.

Oh, and to w. tribble, russianbrides.com. Not that I go there or anything.

thanks...I don't plan going there either...at least not yet.

thanks...I don't plan going there either...at least not yet.

Being from Utah, I would like to offer some defense for this, but I don't seem to be able to come up with anything that won't itself become a blog entry.

And not to nitpick, (OK, yes it is) but it's actually "Lindon" with an "O". Not to be confused with the Linden tree, other than the fact that the town is named after it. Confused? No wonder Lance isn't dating anyone. They can't find his house.

Interesting advertising site, we do not have such advertising.
dating online