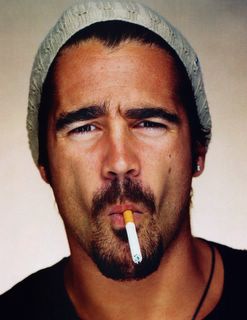 Was he wearing the shower cap in the
sex video? The world may never know.


Poor, deluded Colin Farrell. When will he and all the other celebrities who film themselves in flagrante delicto (literally, "flagrantly, in a delicatessen") learn that those movies never, ever, ever remain private, particularly when you're a celebrity and the other "performer" is, say, a Playboy Playmate. (Who, in this case, a quick Google search will tell you has never been on the Internet not naked. This is your first clue that "discretion" is not especially prevalent in somebody's vocabulary.)

According to the lawsuit filed by Farrell to keep the tape out of the hands of celebrity sex tape collectors everywhere, "The videotape was created by two individuals solely for their private use and enjoyment." Which begs the question: Why a sex tape? Why not, say, decoupage?

Anyway, if there are any celebrities out there who can explain this phenomenon to me, I'm all ears. We get that you're fabulously attractive and all that, but do you really need photographic evidence of everything? Seems to me it's about time celebrities started being ashamed of their bodies like all the rest of us.

"...but do you really need photographic evidence of everything?"

Hmm, I know, they must know that it will make them oodles of money. Then they will donate it all to charity and not buy a bigger boat!

Colin Ferrel is such a douche. After I saw Alexander I promised myself I would go on the internet and bash him. Now that that is done, I can ready myself for Miami Vice.