Unfortunately, science has
yet to develop a convincing
robot 'Shrimp Lover's Combo' 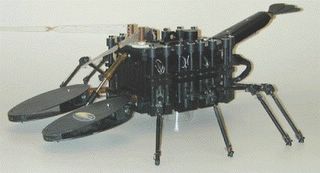 
This week's Invention of the Week award goes to a robot lobster designed by an inventor at Northeastern University, who apparently somehow found time to invent it in between Red Sox- and Patriots-inspired street riots.

The lobster, an entry at Wired Magazine's annual NextFest in Chicago, is meant to troll the sea floor for mines. What it does with the mines when it finds them is unclear, although "crush them in its vice-like grip" would be a fairly cool option.

While real lobsters might feel threatened by such a development, it's worth pointing out that, despite the robot lobster's very expensive mechanical muscles made from the same metal mesh material used to make the stents implanted in heart patients, you still wouldn't want to eat one. Well, at least not without a lot of melted butter.

couldn't be harder to chew than what you get @ a certain national franchise... ya think?

Looks familiar to me...Runaway starring Tom Selleck, Gene Simmons, Kirstie Alley (and I'm one of the extras!)...once again, Gene Simmons, ahead of his time!

if they gave this manly metal crustacean a boston accent, he'd get all the deep-sea chics. Babes and mine-fields? He's practically an underwater 007...