This week's column:
A toned-down Jones?
Say it ain't so! 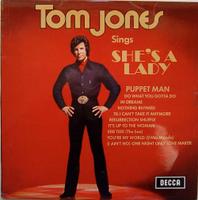 Peter Chianca returns with new columns next week. To close out his vacation -- and to mark Tom Jones' stop in Boston this past weekend -- here's a column from the At Large archives:

Unless you're completely oblivious to important current events, you've no doubt heard the following piece of news: Tom Jones has given up wearing leather pants. Yes, I know, I'm just as disturbed as you are.

Not that I'm a fan of leather pants — I think if I ever tried to wear them my body would simply reject them outright, like a bad kidney. But for Tom, they work; after all, if he got up on stage singing overwrought, cheesy love songs wearing regular polyester slacks, he just wouldn't be Tom Jones. Neil Diamond, maybe.

But the pants aren't all he's giving up; he also says he's going to stop wearing open shirts and picking up the women's underwear thrown at him while he's on stage. Something must be done — if he also decides to stop swiveling his hips I'm concerned he could wind up turning into Jim Lehrer.

To read the rest of At Large by Peter Chianca, click here.

um, i'm not sure... but i think Jim Lehrer is younger