This week's column:
So what's the deal with Christmas?

Once again, Peter Chianca turns over his column space to Mr. Holiday, who will answer your holiday queries. This week: Christmas.
***
Dear Mr. Holiday:
Is it true that although, ostensibly, Christmas celebrates the birth of Jesus, historians and theologians think he was more likely born in June, and that Dec. 25 was picked because it had been the day of a pagan celebration called Saturnalia which commemorated the birth of the sun god?
Wondering in Wellesley
Dear Wondering:
I don't know if that's true, but I do know that, ostensibly, you're going to burn in eternal hellfire.

The fact is, it doesn't matter whether or not Jesus was really born that day, and I'll tell you why: Jesus had a movie that made $361 million last year. Show me one sun god movie that grossed even half that.

For the rest of this week's AT LARGE by Peter Chianca, click here.

Posted by Pete Chianca at 11:19 PM No comments:

In her defense, does it say specifically
in the rule book that she can't flash and
make out with other girls? 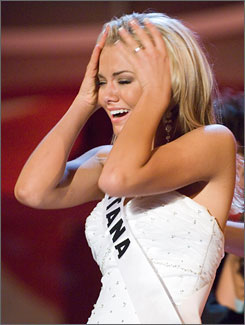 Pop culture trivia question of the day: The person who said, "Those pictures don't surprise me -- she was always showing off her boobs," was referring to:

It's worth noting that the dogs
weren't wearing any underwear either

Britney, Britney, Britney ... We were able to forgive you for wearing the snake at the MTV awards; driving with your child on your lap instead of in a carseat; dumping K-Fed by text message; leaving your kids behind to party with Paris Hilton; and failing to wear underwear. But ignoring your dogs ... Well, that's just low.

But a new online poll has named Britney "Worst Celebrity Dog Owner" for 2006, and by a wide margin, apparently. Hilary O'Hagan, editor of The New York Dog and The Hollywood Dog magazines, said she was the "overwhelming choice," noting, "She once had three Chihuahuas ... and never left home without at least one of them on her arm. As soon as she met K-Fed and had kids they (the dogs) disappeared." And as soon as she met Paris Hilton they (the kids) disappeared, so we're sensing a pattern here.

Then again, what about Natasha Lyonne? Oh wait, that was the neighbor's dog.
Posted by Pete Chianca at 12:02 AM 1 comment:

This week's column:
There's no time like the presents

Don’t tell me — Christmas is almost here and you still haven’t found the right gifts for the important people in your life. Well, that’s just because you’re not on the mailing lists for the companies that make the truly original products, the kinds of items that, when you give them as gifts, say to the recipient: “It’s time you reported me to the local authorities.”

Luckily for you, though, these companies seem to have no trouble finding me. So without further ado, following is the second annual At Large Holiday Gift Guide.

For the rest of this week's AT LARGE by Peter Chianca, click here.
Posted by Pete Chianca at 10:34 PM No comments:

Each holiday season brings certain things that are unavoidable. For instance, at some point in December you’re going to turn on the radio and hear “Dominic, the Italian Christmas Donkey.” And some of those times, if you’re distracted enough, you may listen to almost the whole thing before remembering to change the station. That’s three minutes of your life you’ll never get back.

Another thing you can count on is to be bombarded with umpteen stage productions of “A Christmas Carol,” not to mention the film versions with the likes of Mr. Magoo, Mickey Mouse and the Muppets. (Granted, Charles Dickens is believed to have commented to William Makepeace Thackeray, “My ‘Christmas Carol’ is pretty good on paper, but with a fake felt frog ... well, that would be something.”)

If we do have to have so many versions, though, wouldn’t it be nice if they did something different for a change? For instance, does it always have to be ghosts? Why not ever the Wolf Man? And that ending where Scrooge gets all nice — just once I’d like to see him wake up, down a snifter of schnapps and foreclose on Cratchit’s house.

For the rest of this week's AT LARGE by Peter Chianca, click here.
Posted by Pete Chianca at 11:00 PM 1 comment:

And yet bullets remain readily available

Well, it's official: New York City has banned Trans-Fats from all of its restaurants. But before you panic, don't worry -- Taco Bell will still be able to serve e. coli.

Meanwhile, in its continuing effort to stem the tide of obesity, NYC Mayor Michael Bloomberg is considering the following follow-up bans:

This week's column:
It's an urban jungle out there

I want to start off by saying that, when I was in my 20s, traversing the mean streets of the city didn’t faze me at all. Not that the streets where I lived werethat mean, but they were certainly meaner than the ones I’m used to now in the suburbs, which are not mean at all -- they’re like the Pat Boone of streets. They’re also empty after 8 o’clock at night, which is not a trait that streets in the "mean" category usually like to cultivate.

But despite my diversion into suburbia (like most suburbanites, it feels like one day I just woke up here, like a sailor who gets something funny in his rum and wakes up in the hold of a ship bound for China), I always felt that if I was dropped back into a city I’d regain my urban instincts, like domesticated animals who are returned to the wild and immediately start eating voles.

Which is why I was so surprised recently when my wife and I took my 5-year-old son on the train to see a show in Boston. When we walked into the T station, I was immediately disoriented -- where was the nice lady who sells the tokens? What were these glowing, high-tech card kiosks? I vaguely remembered hearing something about a new fare card system -- I recall seeing Gov. Romney on TV in a train station, looking like he wished something would flood or blow up -- but I had filed it in the back of my brain with all the other things that don’t affect me, like global warming.

For the rest of this week's AT LARGE by Peter Chianca, click here.
Posted by Pete Chianca at 10:47 PM No comments: