If you listen, you can hear the steam
coming out of Nancy Grace's nostrils 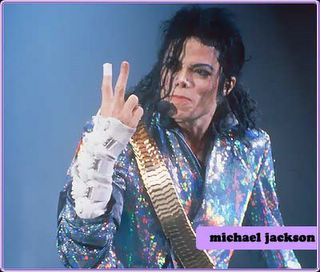 You know what this other little finger could use?
A Band-Aid! Jeeves, bring one immediately!


Things we can safely say Michael Jackson is guilty of:

I bet that the broke "man" Michael Jackson now is will sell dream vacations' packages to his Neverland Ranch to earn a few bucks!

Naw, he's got a golf date with OJ and Robert Blake. After that they're gonna go out and look for the real child-molesters.

Curse you... now that stupid song is stuck in my head for the rest of the day!

Here are a few more:
1. Making Elvis turn over in his grave.
2. Turning the Wizard of Oz into something really creepy.
3. Proving that even zombies want to get their groove on sometimes.
4. Being the first breathing cadaver.

Nice job. Some funny stuff you have there.

It was a THRILLER, wasn't it?

Hope he pulls it off..
Waiting for the 'King of POP' to strike back.
Should be a good story !!

The problem is, Nancy Grace was right all along. Child molester goes free...even though Juror number one thinks that yes, Micahel seems to have molested children in the past....Jacko may in the near future have a nervous breakdown requiring inpatient psychiatric care or he will have a creative outpouring with another number one single. I'll love to see this pan out.

Imagine if he was in Iraq?

Michael Jackson is just over. The best thing for him now is to move to some remote place in
Europe where he can open Neverland Ranch Jr. and start his wonderful life all over again.


I actually fell asleep in Captian EO. I saw the first two minutes. The next thing I know my friend is telling me to get up and leave. The show was over.

Honey I Shrunk the Audience is much better.

You are so right ...Nancy Grace is worst than O'Rielly Factor

Agh! These men and their gloves.

Off to rural Chile where he can replace Paul Schaefer or France where he'll have peers.

Maybe he'll go away if we all just pretend. Michael who?

You know, Michael, there is always the Catholic priesthood.