He not busy being born
is a-busy dying ... for some
Colombia Nariño Supremo! 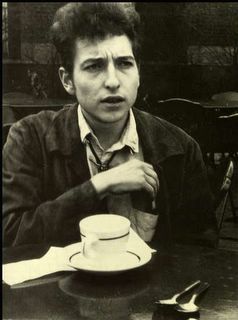 The Grande, my friend, is blowin' in the wind.

Is anyone else as torn as I am over Bob Dylan's decision to release his latest album of 40-year-old recordings exclusively through Starbucks for 18 months? I mean, I'd like to get it so I too can sigh wistfully about the days before he sounded like Alvin the Chipmunk's drunken uncle, but on the other hand, I usually only go into Starbucks if I'm, say, bleeding from my carotid artery and need someone to call an ambulance, and even then only if I can't find a Dunkin' Donuts.

The main reason I avoid Starbucks is the cost of the coffee, which tends to defy my weekly beverage budget of whatever change I can separate from the sticky film at the bottom of my car's cupholder. But I know I don't have to also mention the weird sizes ("Venti," "Vidi" and "Vicci"), the inexorable process of making the coffee that seems to mirror scientists' efforts at cold fusion, and the fact that its employees have been dubbed with the improbably highbrow moniker "barristas," when in actually they're just people who can't work in Wal-Mart for fear of getting wedgies from the guys in the garden department.

I guess I'll have to just suck it up and go in, for Bob's sake. But I'm just buying the CD. If I try to walk out of there with a Grande Arabian Mocha Sanani, please, somebody stop me.

Oh please! For Bob's sake, you better get into Starbuck's this summer and pick up his CD, because it could be the only chance you get to have some decent coffee.

We here in Washington state have long wondered about the Masshole: how is it you people get any work done, meet any obligation, honor any commitment! with the coffee you drink? Lord have mercy.

First, driving into one of those garish stores (yeah,stores, that's what we call 'em in the biz) at 6 am would give you an instant hangover if you didn't already have one, in which case you'd pack it and just call in sick. Second, the battery acid that the menu offers as coffee is a shameful violation of the consumer protection laws. And you, the good people of Massachusetts consider yourself an informed people? And finally, yes, finally, what is my last point? oh yes, I am a member of The BoSox Nation and proudly hoist the Samuel Adams ale and watch Damon's and Affleck's cable show but doggies? DD coffee?

Dunkin Donuts coffee is way suitable for consumption. And those "barisstas" at the Starbucks are way too hyped up for my morning levels. the rate at which they question your choice, and the inflection of these words is like fingernails on a chalkboard to me.

thanks for the info about Bob. I will send in a sucker to pick me up a CD. ;-)

It breaks my heart to know that there are people in the world that don't appreciate a robust, piping hot cup of Starbucks java?! DnD definitely has its place, but nothing compares to Starbucks. Plus, if you've noticed...DnD isn't too much cheaper anymore, that place gets more expensive every time I go in?!

No need to bust an artery, if you feel that passionately about it, there’s no reason why you can't just buy the CD off of the Starbucks website once it's released?!

Beware: There are also people out there that don’t drink coffee AT ALL. These people can’t be trusted…avoid them at all costs…

I bet SB patrons also like avocado on their burgers and pineapple on their pizzas.

I hate coffee, but love Dylan.

I should just shoot myelf now.

What? Are you kidding?!

It does seem odd that the Dyl-man would only sell this album at "Tha 'Bucks." But then he wouldn't be the quirky character we've come to love if he didn't still have a trick or two up his sleeve.

I'd be more appalled at the price of the album than the contents of paper cup that will sit atop it.

Drink the fucking drip! Regular Starbucks coffee is moderately priced, and unlike its cartoony competitors, you're not left with an aftertaste akin to a mouth full of pennies.

The added cost of Mocha or Latte is a fine for being a sissy!

Thanks for the column.

As a recovering Dave Matthews Band fan, I felt the same way about a recent visit to St-rbucks to buy coffee. Then I realized....

Starbucks is not just selling people a cup of coffee. They're selling an identity.

Be careful shopping there. They're not just selling coffee and CDs.

There are more reasons not to patronize St-rbucks than simply the overpriced coffee.

Suck it up, go into Starbucks, get the CD and a GRANDE COFFEE FRAPPACINO WITH CARMEL AFFAGATO and ENJOY IT! You'll be addicted. You can afford it. There's a reason that there is a *$ on every corner - they're darn good. Yummmmy..... And Bob D too! Enjoy - Be happy - Drink *$ = star * bucks $ (do I have to explain everything for you?)

It must be me but Starbucks sucks.. well it does in the UK...its luke warm and expensive... Go and buy the cd and make your own coffee... much cheaper and probably better... Actually the Starbuck in the US wasn't much better... It sucks...

Up til now. I don't get it. Coffee is just coffee. Why bust your butt just to drink SB coffee? I agree with Sally g.

I just hope never to see a Starbucks in Italy. Ever.

Oh, but we do have Dunkin' Donuts.

Starbucks began its decline when some idiot number cruncher decided to drop irish cream from the menu. They have the Bob exclusive but they don't have a single freakin bottle of irish cream. It's like straining out a gnat and swallowing the camel.

No starbucks in Italia.... YET

I understand your opinion on *$'s, essentially that franchise is like the McDonald's of the coffee world.

For all you coffee lovers out there, check out www.coffeegeek.com and www.sweetmarias.com (no affiliation whatsoever).

You shouldn't have to drink crappy coffee!

Well, I'll be skipping the Starbuck's coffee, too, but buying the CD.

But Alvin the Chipmunk's drunken uncle? Maybe I'm just wierd, but I think he sounds better now than he did in the early 60s.

I agree With you.

Skip the annoyingly peppy "baristas" and crazy Starbucks Patrons and just buy the cd online. Just because it is licensed through starbucks, doesnt mean you have to go through the horror of the store. The alanis morissette cd that is also released exclusively through starbucks is available on their website, so once the CD is released, they will probably have more information. starbucksDotcom.