Caution: May cause drowsiness.
Plus make you look like an idiot. 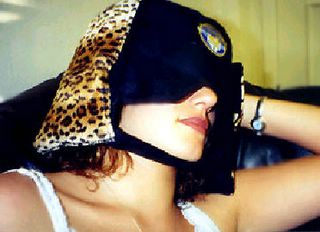 If they'd set Anakin up in one of these babies,
everything might have worked out differently.

This week's Invention of the Week award goes to the Dreamhelmet, a "sleep mask sound-blocking pillow" that also aids weight loss. And not, as you might presume, because it has a metal screen that comes down over your mouth like Hannibal Lecter's.

No, according to a press release from Dreamcloud Productions, a recent study shows that the more you sleep, the less hungry your body thinks it is. Also, if you're anything like me, sleep is the only time of day you're not distracted by the idea that there might be a Twinkie somewhere. Anywhere.

After all, as Dreamhelmet creator Jim de Cordova told the writers of the press release (presumably between naps and his nightly 14-hour slumber-fest), our weight problems are a function of our "frantic and noisy society." Said De Cordova, "Just see a film from the 1960s; everybody had long hair and was slim!" Of course, that could have something to do with having taken so many drugs most people thought that their hamburgers were trying to kill them.

Anyway, the Dreamhelmet is billed as being a useful sleep and diet aid in "Planes, Trains, Cars, Buses, Airports, Campgrounds, Hotels, the Office and your own Bed," although that last place is probably the only one where you won't get very odd stares and/or arrested.

I could have used one on my Myrtle Beach Retreat

I have seen everything now.

She's like the love child of Catwoman and that guy from Blind Justice.

Maybe she's really not sleeping. Maybe she's fighting crimes during that "downtime" and that's where the weight loss comes from...

I wonder if they have a Batgirl version...

the genius of it, of course, is referring to it as a dream 'helmet'. dream 'hat' doesn't have the same ring to it. nor does cap, mask, thing, balaclava, etc. dreamHELMET. makes it sound like if you put it on you get powers.

"you better just give me the fifty bucks. you don't want to make me put on my dreamHELMET."

Read on - this is from a captured Al-Qaida Training Manual:

Advice Taken from the book "Mothakkarat Fida'i Aire8" [Memoirs of a Captured Commando]: Concerning interrogation and questioning, paraphrased.
____________________
8 This book is the memoirs of an Iranian Communist. All brothers should read it.

Lesson Eighteen
PRISONS AND DETENTION CENTERS
IF AN INDICTMENT IS ISSUED AND THE TRIAL, BEGINS, THE BROTHER HAS TO PAY ATTENTION TO THE FOLLOWING:

1. At the beginning of the trial, once more the brothers must insist on proving that torture was inflicted on them by State Security [investigators] before the judge.
2. Complain [to the court] of mistreatment while in prison.
3. Make arrangements for the brother's defense with the attorney, whether he was retained by the brother's family or court-appointed.
4. The brother has to do his best to know the names of the state security officers, who participated in his torture and mention their names to the judge.
[These names may be obtained from brothers who had to deal with those officers in previous cases.]
5. Some brothers may tell and may be lured by the state security investigators to testify against the brothers [i.e. affirmation witness], either by not keeping them together in the same prison during the trials, or by letting them talk to the media. In this case,they have to be treated gently, and should be offered good advice, good treatment, and pray that God may guide them.
6. During the trial, the court has to be notified of any mistreatment of the brothers inside the prison.
7. It is possible to resort to a hunger strike, but it is a tactic that can either succeed or fail.
8. Take advantage of visits to communicate with brothers outside prison and exchange information that may be helpful to them in their work outside prison [according to what occurred during the investigations]. The importance of mastering the art of hiding messages is self evident here.
- When the brothers are transported from and to the prison [on their way to the court] they should shout Islamic slogans out loud from inside the prison cars to impress upon the people and their family the need to support Islam.
- Inside the prison, the brother should not accept any work that may belittle or demean him or his brothers, such as the cleaning of the prison bathrooms or hallways.
- The brothers should create an Islamic program for themselves inside the prison, as well as recreational and educational ones, etc.
- The brother in prison should be a role model in selflessness. Brothers should also pay attention to each others needs and should help each other and unite vis a vis the prison officers.
- The brothers must take advantage of their presence in prison for obeying and worshiping [God] and memorizing the Qora'an, etc. This is in addition to all guidelines and procedures that were contained in the lesson on interrogation and investigation. Lastly, each of us has to understand that we don't achieve victory against our enemies through these actions and security procedures.
Rather, victory is achieved by obeying Almighty and Glorious God and because of their many sins. Every brother has to be careful so as not to commit sins and everyone of us has to do his best in obeying Almighty God, Who said in his Holy Book: "We will, without doubt, help Our messengers and those who believe (both) in this world's life and the one Day when the Witnesses will stand forth."
May God guide us.
Transcription and HTML by Cryptome

Incredible but true. These are the tactics used by the Muslim Terrorists we are at War with - and the Seditious Liberals in the USA and the ACLU are fully complicit in this as well.

* THIS IS SEDITION
* THIS IS GIVING AID AND COMFORT TO THE ENEMY
* THIS DEMANDS THE FIRING SQUAD!

The SEDITIOUS SWINE at:

The Islamic Terrorists of:

ALL SHOULD FACE A FIRING SQUAD!

If the GOVERNMENT WILL NOT DO IT SOON IT IS UP TO THE AMERICAN PATRIOT - so let us begin to prepare right now:

PATRIOTS MAY HAVE TO SHOOT ALL OF THESE TRAITORS OURSELVES!

AMERICA's PATRIOTS MUST RID THIS GREAT NATION OF THESE TRAITORS!

Many Muslims believe that non-Muslims are kaffir-those disbelieving in Islam. This is not an insult; it is a description. The God in whom we believe did not come from the womb of a mother. The USA is a kaffir state-and kaffir includes those U.S. Muslims who ally with non-Muslims, e.g. in the U.S. Army, as in Iraq, and are therefore legitimate targets of jihad.

We must never forget about 9/11 and the attack on the USS Cole. And the destruction of the Marine barracks in Beirut. And the Khomeini regime and the hostage crisis. And thousands of other incidents, stretching back in time to when Muhammad led the first Muslims in the first jihad.

Islamist extremists in the world as estimated by moderate Muslim
leaders: about 12 million. Fundamentalist sympathizers: 120 million.
Those numbers represent 1 percent and 10 percent of the world's
Muslim population of 1.2 billion. The CIA puts the extremists much
higher - 40 million.

The Ayatollah Khomeini stated that the "Quran says: kill-imprison! Why are you only clinging to the part that talks about mercy? Mercy is against God"; and, "We need a Khalifa (leader of Islamic state) who would chop hands, cut throat, stone people."

Not all Muslims are terrorists, but almost all terrorists are Muslims.

"I say to our enemies: We are coming. God may have mercy on
you, but we won't." - Senator John McCain

Ibn Ishaq, Muhammad's earliest biographer (and a pious Muslim) recounts the massacre of the Jewish Banu Qurayzah: "The apostle went out to the market of Medina (which is still its market today) and dug trenches in it. Then he sent for [the men of Banu Qurayza] and struck off their heads in those trenches as they were brought out to him in batches.... There were 600 or 700 in all, though some put the figure as high as 800 or 900." (Ibn Ishaq's Sira, 689).

"St. Michael, the Archangel, Defend Us IN BATTLE. Be our defense against the wickedness and snares of the Devil. May God rebuke him, we humbly pray. And do Thou, O heavenly Host, through the POWER OF GOD - THRUST INTO HELL SATAN and ALL THE EVIL SPIRITS that prowl about the world, seeking the ruin of souls. Amen"

Fear not, for I am with you. I have called you by name, you are Mine. When you pass through the waters, I shall be with you. When you walk through the fire, you shall not be burned, nor shall the flames scorch you. For I am the Lord, your God, the Holy One of Israel, your Savior." Isaiah 43:1b-3a

Hey!! Killer site! Follow me to the totally free dating blog site! No money required..I'm getting tired of these pay dating sites...Aren't you?

...actually something that looks less extreme would work (meaning you might use it)...

As a straight midnight shift worker - I find draping a light item (such as a camisole or tank top) over my eyes & forehead helps me sleep when it is sunny.

It helps me sleep deeper & for longer periods of time.
Also helps me fall asleep faster.

But that one looks like I might get a case of claustrophobia when I wear it... but the concept is definately feasible...

I would feel like a moron wearing that particular model!!!