Because TV somehow seems
less crappy if it's tremendous 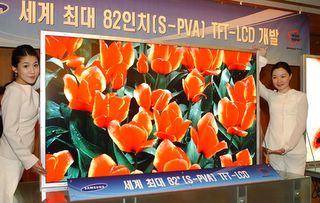 Yes, we know it costs more than a Honda Civic.
But look at the size of those tulips!


This week's Invention of the Week award goes to the dedicated researchers at Samsung, who have worked tirelessly to come up with the 82-inch LCD TV. Finally, the people who've been forced to try to get by with 62- and 72-inch TVs will see some relief.

We're sure there were many times when the Samsung scientists thought about giving up. "It will never work! It's just ... too ... big!," they would cry, in Japanese. But fortunately, the thought of some poor child in Chappaqua, N.Y. crying himself to sleep every night because SpongeBob wasn't the size of a refrigerator gave them the will to carry on.

No pricing has been announced for the new TV, but we can presume it will be approximately one meeeeeeeellion dollars.
Posted by Pete Chianca at 10:45 PM

Great, Now I'll have nightmares of being forced to watch the Teletubbies on that thing.

Nice blog, here is mine:
http://xiping.blogspot.com
Have a nice day!

Just when I thought that there would be nothing to look forward to once my mortgage was paid off...oh God, I need one!

When will the madness end!?!

Do they ever think of the poor bastards (like me) who have to install the damned things?

FOR THE LOVE OF ALL THAT IS HOLY, JUST BUY A FREAKIN' MOVIE THEATER!

Just curious -- wouldn't the people at Samsung be speaking Korean, not Japanese?

By the way, isn't Samsung Korean?

but, just think of how much money i will save on movie theatre tickets...


(what? they're expensive now!)

tv ok happy with the pc

How about the nightmare of watching Boo Bah on it.

your site's cool. check out mine out at www.hamtersarecute.blogspot.com

Soon, we will all have to live on Mars so we can see the gigantic TV that has consumed Earth
.

Soon, we will all have to live on Mars so we can see the gigantic TV that has consumed Earth.

Just try to imagine the horror of watching cartoons on that TV. "Omygod, Dora the Explorer! And she's bigger than me!"

I can't imagine how many zeroes will be in the price tag...especilly since it's in yen.

What if everyone stopped watching TV?