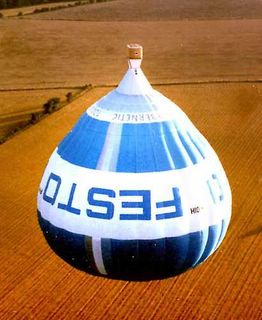 
This week's Invention of the Week award goes to something that scientists and inventors have been trying to perfect for centuries: The upside-down hot-air balloon. This would presumably come in especially handy in places where gravity works backwards.

According to Cameron Balloons spokeswoman Hannah Cameron, developing the upside-down balloon was "a tall order." For instance, she says, "the basket at the top is fake, and there is a real basket underneath, which is hidden by a special skirt that can be lifted as the pilot comes in to land." This solves the main problem that had stymied previous upside-down hot-air balloons, namely the pilot falling to his death or getting trapped inside the balloon and asphyxiating, which happened to more than a dozen volunteers during the rush to perfect an upside-down hot-air balloon during World War I.

Well, we're glad it has finally come to pass, unlike its ill-fated cousin, the upside-down hot-air assisted living facility.
Posted by Pete Chianca at 12:09 AM

i am speechless. what is the ultimate purpose?

I must say that I laughed harder then I have in a while to all the articles you have posted....keep it up

what's the whole point? sheesh. Okay. it's obvious I will never become a great inventor.

I presume next on their list is the under-water helicopter?

I can't wait for the upside down parachutes they will have to use once this thing starts to crash.

I find it interesting that this engineer is living out some sort of fantasy by creating a giant object that requires "skirt-lifting" to be a part of its operation.

Is this invention real?

ya know, and sometimes I wonder why i love this country so much....
I mean, who wouldn't?? we have so much to offer!!!