Get some exercise! Unlike
their chickens, which are in
pens the size of a Filet o' Fish box 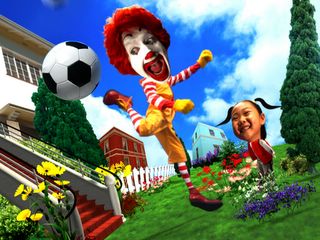 Look, Susie! I can still kick the ball, despite having
just ingested the equivalent of 12 pounds of lard!

In the good news-bad news department: The good news is that, according to a press release from McDonald's corporate headquarters, "Ronald McDonald is expanding his role as a global ambassador of fun, fitness and children's well-being. McDonald's® Chief Happiness Officer™ Ronald® is inspiring and encouraging kids and families around the world to eat well and stay active, or as he likes to say, 'it's what i eat and what i do™ ... i'm lovin' it.™'" The bad news is, McDonald's is still turning our nation's children into bloated freaks who sweat grease from every pore. So it's kind of a toss-up.

I'll admit that on the one hand, I have very fond memories of McDonald’s from my youth, when I could eat an entire Quarter Pounder in three minutes in a moving car and be left with nothing more than a satisfied, meaty feeling. But that memory stands in direct contrast to what happened a few weeks ago, when I ate a handful of fries and almost immediately felt like someone had shellacked the inside of my cheeks with Crisco.

I keep going there, however, because I have kids, and McDonald’s has the Happy Meal. This is the meal that comes with a little plastic toy — even the finest restaurants don’t give you one of those.

Anyway, when you see the new commercials featuring Ronald "playing basketball with NBA superstar Yao Ming," I hope it encourages you to go out and do something healthy. Like hand a whupping to a freakish man-clown.

Well, your right, it's terrible for you. But at least they are finally changing a bit. I mean, even I stopped eating as much fast food and gave up completely Krispy Kreme... They need to change with the times I suppose.

It's fast and convient, especially when you're a working parent and a full time college student. I am just glad they have added alternatives to the happy Meal, which my chidren love, such as milk or apple juice instead of the soda and apple wedges in place of the fries.

Yah, read about this Macdonald's new image change to engage more physical exercise to the kids in the papers here in Singaproe today. Well, i do agree with you that Macdonald's are a fun place to be when we were younger. Well, i hope to see mac and yao ming advertisement soon here in singapore..

I don't think mcdonalds will be around in ten years.

or at least... that's what I like to pretend.

Red pepper the kid's happy meals, tell them it's made from tele-tubbies, do anything you can to break them of this poisonous addiction.

McDonald's... It's ironic that they're selling salads now - I'm assuming the lettuce is smothered in green butter that soaks into the leaf, but you know what they say about 'assume'

DreamWorks created SHARK TALE because of their Pixar envy; Nemo was such a success. It's too bad NightmareWorks is only able to copy the ideas and not the quality of the flicks... It would benefit the industry ~_^

SHARK TALE was made for the moving of Happy Meals and nothing more. Oops, I hope I didn't offend someone - you'll have to excuse my opinions.

Ronald really is somethin' else, now isn't he?

Very ironic considering McDonalds and fat fast foods like that cause people tp be fat but then they are saying "After you gain 30 pounds from eating our food we want to to jog it off". Meh, istill love it though.

McDonald's food always used to make me need to take a crap. That cannot be good...

I'll believe it when I see it. And by "it" I mean walking into a bar and seeing Ronald McDonald arm wrestle Lawrence Taylor just so they can get the girl. And by "the girl" I mean a Vietnamese transvestite hooker. (Post-op)

I think that the fast food businesses shouldn't try making their meals more healthy - I mean keep them tastily loaded with grease because that's what fast food is. It's the people who eat it constantly that are at fault. EAT BETTER! Just because McDonalds has really fat filled food doesn't mean you have to complain about it because you got fat from eating it. Just don't eat it. Go somewhere like Subway or Quiznos. Our society is becoming so obsessed with being healthier when it comes down to this: People are doing all of these fitness plans to get in shape because their fat. Most people are fat because they ate unhealthy food. DON'T EAT UNHEALTHY FOOD! and you won't have to worry too much about getting fat. Jeez!

I can't stand McDonalds anymore. They open for 24hours so the taste of it is linked now too being crazily intoxicated. Me and my friends call it 'the night ender', cause the second you bite into a quarter pounder, you can never party again untill tomorrow

oh dear. Maccas is not supposed to be a healthy alternative! its salt... beautiful salt.... and carbs... precious carbs! you cant beat it at 4am after a big night!it is a scapegoat in the war against obesity... moderation people! Mcdonalds shouldnt be how they learn this, common sense should.

If you think McD's is so bad, then don't eat it. Don't blame a business for making people fat. They don't put crack in the fries ya know. It it someone's choice to eat it.

Actually you know, if you have the maccy D salad with the salad dressing then your eating more fat than is in a big mac! So even the healthy shit isn't healthy!

"Global ambassador"? That's a bit frightening. However, maybe it's exactly what we need to spur our lethargical U.N. to action. I mean, John Bolton is one thing, but an overly-enthusiastic clown? That would curl some ties... I can see it now...

"The chair recognizes Representative McDonald"
"Oh please, silly, it's Ronald!"
"Of course... Mr. Ronald?"
"Well, I propose we spread the goodness of Corporate America, greasy obesity statistic-causing hamburgers and catchy but hip theme songs throughout the world in the form of my smilingly sadistic face. Kill an insurgent and get one free! We could have democraburgers, too, with red-white-and-blue ketchup!"
"A wonderful plan Mr. Ronald! Wow, this is so much better than doing nothing all day! I'm lovin' it!"

...If I had to choose between a nuclear apocalypse and McDonald's having any more influence over the world I would choose... oh wait, one will probably lead to the other, so what does it matter?

M to the D Mcdonalds-yay mcdonald should serve pizza called the McCheesy or someting. : ))))

I like the graphics about MCdonald. Oh man, my 4 year old kid is a mcdonald happy meal addict :(!

I completely agree with you! They are so dumb!

I still don't really buy into the whole 'eating healthy' at a place like Macdonald's. The whole idea kind of strikes me as ordering a Big Mac with fries and a diet Coke- it doesn't make sense. That and I think they're just covering their butts 'cause they've begun to realize that more and more of their patrons and becoming or already are, overwieght.

It's not that people hate McDonald's...it's that they're afraid of clowns....

Hasn't anyone seen Supersize Me?

macdonalds... the place ot total evil. I can make any one of their burgers for 4 times cheaper, and I'm not lovin their crappy food. look what you'll become after decades of eating macdonald trash- a freaky, psychotic clown.