What else about me can
you make look fake, Doctor? 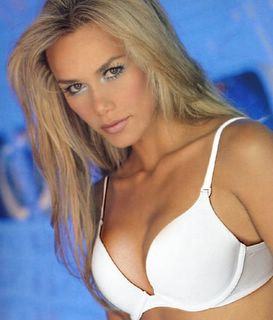 But can it do anything about the eye shadow?

This week's invention of the week award goes to the "Evolution by Margarita" bra, the bra "designed to mimic the breast implant look." At last, now every woman can look like she has huge fake breasts. It's the need for inventions like this that led to the founding of MIT.

According to the press release, "The best bra should lift and separate each breast, so that your chest doesn't wind up looking like your derriere" -- which makes sense, given that most people don't even want their derriere to look like their derriere. And the Evolution bra takes that concept to its next logical plateau, ensuring that each breast has its own hemisphere.

Up next: A bra that makes it look like you've had a skin rejuvenation peel!

The female wardrobe continues to expand in ways we'll never understand at least this one sorta benefits out viewing pleasures.

I bet it's not comfy to wear though.

NO bra is really comfortable... but if I HAVE to choose, give me a bra over the implant any day, guys! ;-)

And I haven't even figured out the miracle of the IPEX bra. Oh hell, I can't keep up anymore. The IMPLANT BRA???

Many women after having children need a lift - it's natural because the boobs just start to point down. To wear this bra is 100% better than to have the surgery, I think. I support products and ideas that dare to be different, they make life more interesting!