Can't talk now ... I'm in the middle of an eBay death match for the Holy Grail of Bear in the Big Blue House toys: 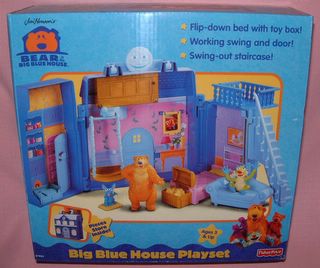 Yes, it's the Big Blue House Playset -- mint in the box! Never been opened! And I'm going to get this thing for my kid even if I have to spend the mortgage money and stiff the oil guy. Again.

If you have a preschooler who's a Bear fan you know that Disney unceremoniously pulled all the Bear merchandise off the shelves a while back as they finalized the character's purchase from Jim Henson, who could not argue for the best terms in the deal, being dead. The result is we parents wind up fighting it out on eBay, and Michael Eisner just laughs and laughs and laughs. I hate Michael Eisner.

I wondered where this listing went...