Although for some reason,
Bob Iger isn't returning his calls 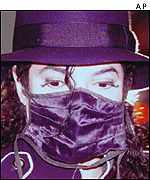 It was bound to happen sooner or later: Michael Jackson is job hunting. I know, because he sent this blog his resume:
MICHAEL JACKSON
Somewhere in Bahrain
kingofpop@gmail.com
Objective: To obtain a position that would utilize my many skills, including building fake theme parks, walking backwards while making it look like I'm walking forward, and dangling babies from balconies.

Limitations: Please, no work that would put undue strain on my "nose."
Posted by Pete Chianca at 10:33 PM

Apparently Mr. Jackson misunderstood. They want him not as a consultant but as one of the zombies in the theme park's Haunted House.

A rep for the Company was quoted as saying " My bad. Oopsie!"

Let us know how the interview goes!