Column: What's with all the Bruce bashing? 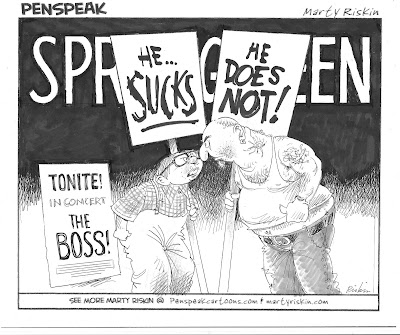 I will admit to a certain lack of objectivity when it comes to Bruce Springsteen: I discovered his music as an impressionable teenager, at that exact time when you’re ready for what’s coming out of your radio to be about something other than girls and dancing and pop fantasies — although definitely those things too.

But I figure even if he’s not exactly your thing, you have to respect his body of work, and his longevity, and his work ethic, right? There’s no reason to, say, revile him with the intense, burning hatred of a thousand suns. Oh, there is? My mistake.

Yes, as tends to happen every time Springsteen ramps up a new album and tour, critics have jumped up not simply to parse the vagaries of his latest album, “Wrecking Ball,” but to declare him a worthless, no-talent phony who’s somehow managed to hoodwink millions of unsuspecting fans — not just into buying his albums and concert tickets, but into believing this manufactured corporate hack is worth even a second of anybody’s time.

Take Victor Fiorello’s piece for Philadelphia Magazine on “Why I hate Bruce Springsteen,” which is so all-over-the-map — He’s from New Jersey! He wears an earring! — you have to wonder if it’s actually just a brazen play for Google hits. And John Sharkey III in Philadelphia Weekly trots out the argument that Bruce is a fake when he sings about the working man: “How did he pull it off?” Sharkey asks, intimating a vast conspiracy worthy of a Warren Commission report.

I admit that when I read screeds like this, I have to ask myself: Am I the one who’s crazy? I consider myself a smart person who knows a little bit about music — have I somehow been tricked into thinking these songs are about something? Is that feeling of elation I get at his concerts a mere mirage? Is Springsteen in fact a hologram?

It doesn’t help that the standard arguments never seem to hold water. I don’t see how Springsteen can be declared a fake just because he’s made money; he grew up poor with an often unemployed father, and we all know you are who you are well before you hit your 20s – that’s why people who grew up during the Depression still sit around with the lights off. Your childhood stamps you forever, and in Springsteen’s case it’s provided the thread of his entire career.

What most confuses me, though, isn’t the criticism but the unabashed hatred, the seething bile, the utter contempt for Springsteen’s stupid, deluded devotees. What’s driving it? I don’t like Rod Stewart’s 47 albums reinterpreting the Great American Songbook, but I don’t begrudge his fans their enjoyment of them, or want to strangle him in his sleep, usually.

I guess one possibility is jealousy: Can these writers simply not believe they’re still slogging away anonymously while Springsteen continues to log No. 1 albums and sold-out tours? I find it interesting that, in a particularly frothing piece, the Montreal Gazette’s Juan Rodriguez wears a bad review he gave Springsteen in 1977 as a badge of honor, like some old folkie still yelling “Judas” at Bob Dylan for going electric in 1965.

Or is it that these critics are completely disconnected with what it’s like to be a real, actual human being? Jon Caramanica of The New York Times decries “the sodden workingman empathy” of Springsteen’s new song “Jack of All Trades,” saying it “literally made me nauseous.” Meanwhile, the day the song debuted, the E Street Radio satellite channel was deluged with calls from people saying they felt the song could be about them, or a friend or a loved one. It spoke to them, and not in a nausea-inducing way.

Maybe what it comes down to, though, is that for whatever reason these critics are irrevocably put off by the way this man’s music actually helps people better understand the world, or carries them through some of life’s toughest moments. Or by how his concerts — those legendary three-hour celebrations of life and love and rising up from the depths — send them out into the night, exhausted and exhilarated at the same time.

They just can’t grasp it, so instead they pile on, and try to poke holes in his image, and make fun of his earring and the fact he’s from Jersey — and for that I feel sorry for them. I hope someday they find something that means to them what Bruce Springsteen’s music means to us.

But until then, guys … Leave us out of it.