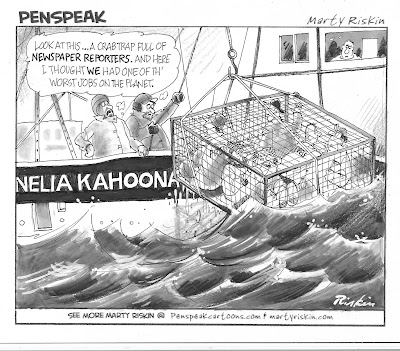 These days, when I tell people I’m in the newspaper business, they tend to respond with that look — you know, the one that, to a casual observer, would seem to indicate I just told them my kids had been put into a foster home, or that my doctor just gave me six months, tops. It’s a mixture of concern, pity and a sort of abject incredulity. Sometimes I even see it in the mirror.

Unfortunately, I fear it’s only going to get worse now that the Wall Street Journal has reported on careercast.com’s “Worst Jobs of 2012,” with the fifth worst being, yes, “newspaper reporter.” To which I can only say: Lumberjack, dairy farmer, oil rig worker and enlisted soldier, you’ve been pwned! Boo-ya!

Actually, I was a little taken aback by newspaper reporter’s high showing. Yes, it can be a tough job, in that it basically hinges on bothering people all day long, sort of like a telemarketer who writes down and publishes everything you say. But unlike some of the other professions on the list, there’s not much chance of our subjects falling the wrong way and crushing us or exploding suddenly in a massive fireball. (Unless maybe your paper is in New Jersey.)

Still, to be a “best job” a job apparently has to have just the right combination of a good work environment, a high salary and low stress. In other words, it has to be a job that doesn’t exist here on earth, but rather in some whimsical make-believe workplace full of imaginary responsibilities and stunningly generous bonuses. (Sample jobs: Unicorn groomer, Goldman Sachs executive.)

So the No. 1 best job is of course “software engineer,” although I question how good a work environment that could be, given that every day when you went into the office, you’d be surrounded by software engineers. (Just a little high-tech IT humor there.)

As for jobs that are still among the worst but supposedly not quite as bad as newspaper reporter, these include waiter/waitress, dishwasher (dishwasher!) and meter reader. This is surprising, because if you’re a meter reader you’re basically stuck reading meters now and forever, but if you’re a newspaper reporter and you work hard and put your time in, you might eventually be able to leave the business and become a meter reader.

And it’s true that journalists often wind up going into other lines of work, mainly because they get tired of their parents reading lists of the worst jobs and calling them all panicky about the remaining student loan payments. But the ones who stick it out probably do so because they’re not looking for low stress and high salary, for a good reason: They are insane. Wait, I read my notes wrong. It’s because they want to use their gift to inform people about things that are important in their lives. You know, things beyond what their meter says.

And that, I guess, is what separates newspaper reporters — who will be the iPad and magic web cloud and direct-to-your-optic-nerve reporters of the future — from the dishwashers of the world, no offense to dishwashers. What these journalists do is a calling, and it’s relevant, and it’s important … I’d argue at least as important as clean dishes.

So my message to reporters, along with their beleaguered editors (and yes, whiny columnists too), is to soldier on. Wear your worst-job status as a badge of honor as you uncover the important and even the mundane stories that illuminate the world we live in, and be confident that your industry’s so-called “hiring outlook” will eventually turn around, since what you do will be necessary well into the future, no matter what form it takes.

And if anyone gives you that look when they find out what you do, try to resist conking them one. They might fall the wrong way and crush you.