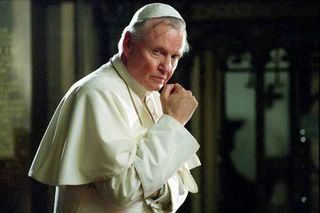 You dis the Catholics you get some a' this, know what I'm sayin'?

So let me get this straight -- You defy the Nazis, become the spiritual leader to millions, survive being shot and forgive your attacker, and are mourned by the world when you die, and you’re honored by ... being played in a CBS TV movie by Jon Voight? The “Anaconda” guy?

Anyway, I hear Voight is actually pretty good as the old Pope, and Cary Elwes is equally adept as the young pope, a role vaguely reminiscent of his turn as Lt. Kent Gregory in “Hot Shots!” If the real Pope were alive, I'm sure he'd be honored. Although that whole sainthood thing would be pretty good too.

Pope John Paul didn't have a hot daughter*, I tell you what.

You know Angelina "You know you want me" Jolie.

Just another movie passing over the obvious choice for the role because of hollywood politics.

Father Guido Sarducci (aka Don Novello)
The man, the myth, the legend.
Anna you to canna be da pope!

I would have made Jon Voigt the current pope. Or possibly Emperor Palpatine (Ian McDiarmid). Naturally Cardinal Jar Jar would be tricked into calling for the vote that gets him empowered.

Upon achieving power his first act is to deny Gungans the right to become priests. If someone can prove that being a Gungan was only a temporary condition or have not been a Gungan for the last several years they may be allowed to join the empire...er priesthood.