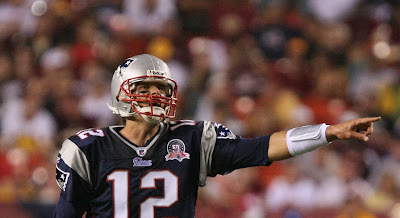 Just when you thought the baseball season was destined for another ho-hum conclusion, the Red Sox and the Atlanta Braves suddenly and unexpectedly began engaging in a death struggle to see who could suffer the most complete and embarrassing September breakdown. It was close, but Boston pulled it out! Pulling it out is in.

As a result the Sox are out, especially Terry Francona, Theo Epstein and Jonathan Papelbon, who are all now out of town. Boston fans probably shouldn’t have been surprised, though, given the Patriots’ collapse against the Jets in last season’s playoffs and the Celtics’ collapse against Miami in the semifinals. Let’s face it, they all folded like cheap umbrellas. Cheap umbrellas are in.

The exception of course was the Boston Bruins, who managed to ward off the Canucks to take the Stanley Cup. Warding off Canucks is in, and if you don’t believe us, just try spending some time in Canada. This just goes to show you that even though they’re the lowest paid and the most unkempt of professional athletes, if you just give them a shot, hockey players will beat you within an inch of your life.

Actually showing up seems to be becoming a problem in professional athletics, with exhibit “A” being the almost-aborted NBA season. Of course, the players were “locked out” by the owners, who were very upset that the players were making all that money for doing the playing when they felt they should be making more money for doing the owning. We’re paraphrasing but we think that was basically it. Owning is out.

Of course the NFL also had a lockout, but luckily that one occurred during the preseason, when most of the players on the field tend to be strangers who’ve wandered in from the parking lot. (The preseason is out.) Fortunately they were able to resolve that, and now the players are out there playing, with the exception of the Patriots’ defense.

Baseball players have no trouble showing up for work, because, let’s face it, who’s working? Pass the chicken wings!

TOMORROW: All the rest!
Posted by Pete Chianca at 8:35 AM

Email ThisBlogThis!Share to TwitterShare to FacebookShare to Pinterest
Labels: Column, In and Out, Sports