Column: The only GOP candidates guide you’ll ever need 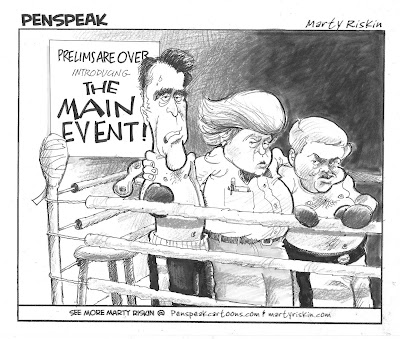 Can you believe it’s almost here already? No, not Christmas — the GOP primary season! And if you’re one of those people who hasn’t been paying very close attention, it’s entirely likely you’ll soon find yourself in front of your ballot with no idea which candidate to vote for, and wondering what happened to Herman Cain. (Which, coincidentally, is exactly what Herman Cain is wondering.)

But don’t worry — the following guide should tell you everything an uninformed GOP voter needs to know. And if you are informed, please don’t read it, because I hate getting angry letters.

Bio: Romney is a self-made millionaire, starting out with only the shirt on his back and a father who was CEO of American Motors and governor of Michigan. He feels that if he is elected president, he would be president, which would be awesome. He’s been known to heat his New Hampshire lakeside estate by burning $100 bills.

Pros: Odds are if he got elected president, he wouldn’t actually do anything he says he’s going to do, which changes every day anyway.

Cons: May actually be a hologram.

Bio: As a congressman in the 1990s, Gingrich is often credited with engineering a Republican majority in Congress for the first time in 20 years, so you can blame him. He has been a devoted family man with all three of his families. He is known as a straight shooter who says what he thinks and would rip out your still-beating heart if given the opportunity. Those ethics charges were a big misunderstanding.

Pros: Probably too old to have any more affairs, so there’s that.

Bio: As governor of Texas, Perry has overseen the execution of more than 230 prison inmates, some of them in his own driveway. He thinks there’s something wrong in America when gays can serve openly in the military, but if you go to church on Christmas, President Obama will bludgeon you with a crowbar. (Paraphrasing.) Perry has several far-reaching plans to change the scope of government, some of which he can even remember off the top of his head.

Cons: How much time have you got?

Bio: Bachmann and her husband, Marcus, have taken dozens of foster children into their Minnesota home, where they work hard to “pray away” any potentially embarrassing personal traits. Since declaring her run for the presidency, Rep. Bachmann has immersed herself in the important issues facing the country, such as where the Revolutionary War was fought, and what it was. Fun fact: When in the same room with Michelle Bachmann, no matter where you go, her eyes seem to follow you.

Pros: It’s about time the United States had a woman president.

Cons: Just not this woman.

Bio: Santorum is a former senator from Pennsylvania known for his fiscally and socially conservative views, and for being a secretly gay man. He’ll soon be discovered in a compromising situation with another man, possibly in an airport bathroom. A lecture tour with former Sen. Larry Craig and Rev. Ted Haggard will likely follow. You heard it here first.

Pros: It’s about time the United States had a gay president.

Cons: One who’s a little less self-loathing would be nice.

Bio: Rep. Ron Paul of Texas is a well-spoken physician and organized campaigner who polls well across the nation, has a lot of common-sense ideas for putting the United States on the right track and a large, extremely devoted following of dedicated constituents and campaign workers. So naturally nobody takes him seriously.

Bio: Former Utah Gov. Huntsman has … I’m sorry, who were we talking about?

Cons: I’m sorry, who were we talking about?

Hmm … Reading these over, it seems possible that it may still be difficult for people to pick a candidate. But even if the choices don’t seem ideal, remember: There’s always hope.

Peter Chianca is editor in chief for GateHouse Media New England’s north-of-Boston newspapers and websites. He wishes there was going to be a Democratic primary, so he could make fun of them too. Follow him on Twitter at twitter.com/pchianca.