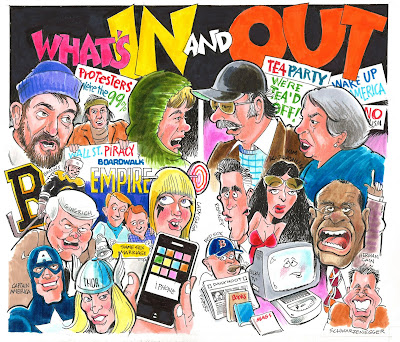 Ah, the new year — what better time to take stock of what’s really important? You know, things like what’s in and what’s out in news, politics, entertainment, sports and life in general. But don’t worry, we’ll do all the heavy lifting. Heavy lifting is out.

In case you were wondering, we’re mad as hell, and we’re not going to take it anymore, whatever “it” is. As to who “we” are, it’s basically everybody. Not taking it anymore is in.

Around these parts, occupying was in, whether it was Wall Street, Boston or Wal-Mart on Black Friday. In each case, the result involved pepper spray. Pepper spray is in.

The Occupy movement may not have had a clear agenda, but it did get across at least one important message: the 99 percent are in, and the 1 percent are out. Unless you’re talking about living in mansions, owning yachts and eating fois gras, in which case, it’s the 1 percent who are in, and the 99 percent who are outside, looking in. You know who you are.

Of course, in other places around the world, occupying got a little more hardcore. We’re talking about places like Libya, Tunisia and Egypt, where protests were less about drum circles and portable libraries set up like little literary M*A*S*H units, and more about armed dissidents setting things on fire. In other countries, arming dissidents is in. They eat pepper spray for breakfast in these places. We’re pretty sure we mean that literally.

Standing up for our rights is also in, whether it be same-sex marriage, saying “Merry Christmas” or having a Facebook feed that doesn’t look like the MSNBC news ticker threw up. Granted, not all these carry the same moral weight, but it’s the idea that counts. Moral relativism is in.

Taking responsibility isn’t exactly a huge pastime right now. For instance, the Occupiers don’t want to pay their student loans or replace the sod that came up when they pitched their REI tents. And rich people don’t want to pay higher taxes, and by “higher” they of course mean “any.” And Kim Kardashian doesn’t want to stay married. Being married to a Kardashian is out.

Nowhere is this more apparent than in the world of politics, which resembles Khazad-Dum in Middle Earth, except with more Orcs. For instance, you have people like Rep. Anthony Weiner, who thought it was perfectly fine to send close-up pictures of his underwear to strange women and then lie about it. This wouldn’t have been acceptable even if the underwear still had been in its original packaging, although that certainly would have been better.

Then there are the GOP presidential candidates, such as Herman Cain, who dropped out of the race after he was accused of sexual harassment or illicit affairs by … wait, let us check our notes … EVERYBODY. He admitted no wrongdoing, and said instead that he would be going on to “Plan B.” Plan Bs are in.

Mitt Romney, meanwhile, refuses to accept accountability for his previous, more moderate stances, saying that the media have taken his entire life out of context. (Context is out.) To his credit, Newt Gingrich has taken full responsibility for every one of his 230 affairs. Wait, that’s actually the number of people Rick Perry has executed. It’s so hard to keep up. Keeping up is out.

Others who’ve failed to take responsibility for their questionable actions include Casey Anthony, Charlie Sheen, Rupert Murdoch and Alec Baldwin. Arnold Schwarzenegger, for his part, did in fact take credit for the love child he fathered with his maid, but only after the boy started talking in an Austrian accent. Austrian accents are out.

TOMORROW: Ins and Outs in Entertainment.
Posted by Pete Chianca at 8:27 AM

Email ThisBlogThis!Share to TwitterShare to FacebookShare to Pinterest
Labels: Column, In and Out, News, Politics