Column: The people versus my dogs 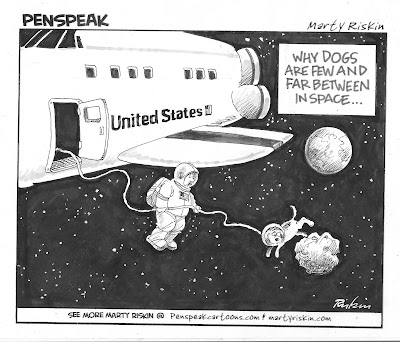 From: Ronald Effinger, Attorney at Law

Please be advised that I, Ronald Effinger, Esq., acting as licensed attorney for Peter Chianca (heretofore referred to “your owner”), am hereby presenting you with an official request to CEASE AND DESIST your constant and deliberate efforts to make him look stupid, which has caused him significant pain and suffering.

As substantiation of our claim of suffering we put forward the following evidence.

1) On Nov. 28 of 2011, shortly after your owner let you out into the enclosed area at the front of your property, Penny scratched on the door, presumably to request re-entrance into the home. Upon your owner’s opening the door, Penny stared at him quizzically and refused to enter, instead returning to the yard to retrieve a muddy bone and continue barking at her own echo.

This is a pattern of harassment that has continued on a daily basis for at least the last three (3) years and has left your owner subject to the ridicule of neighbors, who have been known to observe the scene and shake their heads, as if to indicate that your owner has lost control of his own pathetic life.

2) Despite the fact that your owner has provided you, free of charge, with full run of his household — including use of numerous couches, beds and ottomans and unfettered access to the area beneath the dining room table — several of you have insisted on bolting through open doors without the slightest provocation.

This has resulted in your owner having to seek you out on foot, at times traipsing through the yards of disapproving neighbors (see No. 1, above), and at other times driving slowly down the street in his wife’s Saturn Astra, shaking a box of Milk Bones out the window like a “demented maraca player” (to use his term).

3) During your nightly excursions with your owner into the backyard, you have refused to cooperate in an orderly fashion unless he provides you with a “cookie” (Milk Bone, Pup-Peroni, etc.). Over time this has resulted in a proliferation of said treats in your owner’s pockets (of coats, jackets, sweatshirts, ponchos, etc.), making him smell vaguely of beef, chicken and lamb. This has caused him embarrassment in several personal and business settings.

They have also caused him to smell of bacon, which we are willing to overlook, because he doesn’t really mind that.

4) Several times during walks in public parks and woodlands, your owner has given in to your entreaties to be allowed “off-leash” (delivered by you in the form of big, sad eyes and insistent pulling). But on more than one occasion you have failed to live up to your end of the agreement, which requires you not to bolt toward advancing walkers and greet them with jumps, licks to the face and sniffs of their personal regions.

To the contrary, you have engaged in this behavior frequently, most often with walkers of greater apparent size and strength than your owner, some of them armed.

Between that, and your tendency to take advantage of the times your owner has forgotten to bring along a plastic bag by “doing your business” in the most public possible areas (sidewalks, centers of soccer fields, on veterans’ memorials, etc.), walking with you has often become a traumatic experience.

Despite your otherwise unconditional devotion, your constant companionship and your irreplaceable contributions to the family unit, if you do not cease and desist in your efforts to undermine my client’s self-esteem and personal standing, we will have no choice but to seek compensatory damages.

Also, you’d better get in the darn car if you want one of these Milk Bones.