COLUMN: Waiting for the end of the world ... 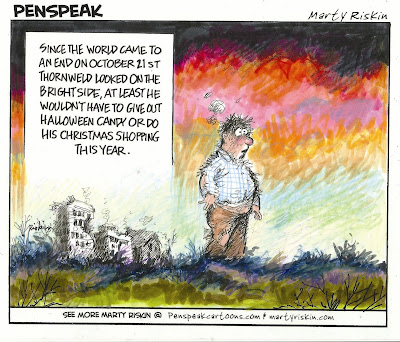 Ah, it’s that time of year again. The weather’s turned chillier, shoppers rush hurriedly from store to store, and a particular phrase is on everyone’s lips: “THE END OF THE WORLD IS NIGH!” This statement may or may not be followed by an anguished wail and/or rending of garments.

Considering most of the press releases I get include either the phrases “craft fair” or “ham and bean supper,” this would obviously be considered Big News. But oddly enough, I’ve yet to see reportage on this by any of the rest of the Media of the World, which must still be busy tracking the Black Friday tramplings. So it seems it’s up to me to bring up some of the obvious questions raised by this announcement, such as:

1) What happened to 2012? Can’t those stupid Mayans get anything right?

In order to better help us better understand our impending annihilation, I thought I’d walk you through the highlights of the 18-page (!) e-mail, which I decided to print out on the grounds that preserving trees is now no longer necessary, and also I only need my ink cartridges to last another 11 months. (Or maybe even six months, assuming that printing things becomes less of a priority after the giant, world-destroying earthquake.)

First, the release insists that it is “not unusual that God’s people have been given insight into the timing of the end of the world.” Apparently it’s also happened those other times when the world was supposed to end but didn’t, leaving all the people holding “The End is Near!” placards to just mill around sheepishly, like Springsteen fans still waving a “Play Thunder Road!” sign after the lights go up.

As for the time between Judgment Day and the actual End of the World, apparently that’s to provide those of us who haven’t been called up into heaven with “the most horrific period of five months of torment, misery, sorrow and unspeakable hell on earth,” or, as we call it here in New England, “winter.” (Just a little End of the World humor there.) “How awful!” the Watchman then declares, just to drive the point home in case we haven’t been paying attention.

It’s worth noting, though, that although we will be annihilated in fire and cease to exist after the five months, the e-mail asserts, “there will not be a conscious suffering in a place called hell.” That sound you just heard was Charlie Sheen exhaling and ordering another round of drinks.

Personally, I’m hoping that God isn’t really planning to save just 200 million chosen people and leave the rest of us to “die like a beast” rather than rise up into heaven. Because for one thing, I’m counting on beasts being allowed in heaven, because when I die I’m going to have a lot of catching up to do with my dogs. And second, judging by the typical criteria, I’m guessing the 200 million saved people will include the likes of Sarah Palin, George W. Bush and Glenn Beck, who I’m guessing will not want to lick me or catch my Frisbee.

Still, even though I’m skeptical, the Hourglass Watchman asks that I “please consider publishing an article … regarding this awesome urgent and important matter,” so that’s what I’m doing. Just like I do when people send me their ham-and-bean-supper notices.

Which reminds me: If you’re planning one, you may want to schedule it before next October, just in case.

This column appeared originally in North Shore Sunday. Follow Peter Chianca on Twitter at twitter.com/pchianca. To receive At Large by e-mail, write to info@chianca-at-large.com, with the subject line “SUBSCRIBE.”

Email ThisBlogThis!Share to TwitterShare to FacebookShare to Pinterest
Labels: Column, End of the World, Religion

Sorry but the world will not end in 2011. God does not give us a time when He will be back, but He does give us signs to look for to show He is near. Those signs are being forfilled today, we are very close but not there yet. Probation will close 1 year before Christ comes, and probation will not close until every one on this earth has had an opportunity to choose which side they want to be on and that will be decided when the "blue laws" Sunday laws are enforced right around the world. First it will start with fines, then it will get worse and every one will be forced to worship on sunday wether they like it or not or on pain of death!