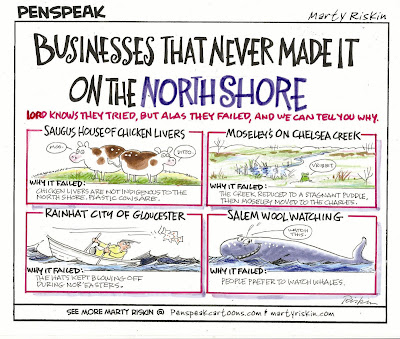 It’s almost time to start another new year, meaning soon we’ll all be making resolutions to be better human beings, or at least eat fewer fried pork products. These resolutions will only last until halftime of the first New Year’s Day football game, but at least we’ll feel good about ourselves for those few hours.

But I had an idea for some other kinds of resolutions when I took my parents to the House of the Seven Gables in nearby Salem, Mass., and all the other visitors were from Switzerland and Germany. Apparently people from this country have already seen all the gables they need to, or they were all at Target.

With that in mind, I’m resolving this year to take advantage of some more landmarks of Boston's North Shore that I’ve yet to experience. You’re my witness — in 2011, I will:

1) Go somewhere that has “witch” in the title. Speaking of Salem, it’s amazing that I’ve gone this long without ever setting foot in the Salem Witch Museum, on a Salem Witch Tour or in a store where you can buy newt, eye or otherwise. I figure if I can come home with one $7.99 plastic witch tchotchke, those women will not have been hanged in vain.

2) Ride the OGO. The OGO, as I’m sure you know, is a giant plastic ball that you climb into, at which point they roll you down a mountain, where you’re buffeted around inside it like an unfortunate hamster. The Amesbury Sports Park bills it as “like being in a washing machine and on a roller coaster at the same time,” so if people aren’t flying in from Germany to do that, they’re reading the wrong tourism brochures.

3) See the “Spirit of ’76.” This famous painting of a Revolutionary-era fifer and drummers is on display in the Selectmen’s Room at Abbot Hall in Marblehead, Mass., so I have no excuse for not going over there and trying to take a picture of it, at which point the selectman on duty will tackle me and smash my camera with an authentic 18th century nose auger.

There are plenty of other North Shore activities I could resolve to do — things like riding the manacled elephant at the Topsfield Fair, or eating dinner on top of the Newburyport Rear Range Lighthouse (even if in both cases I have a distinct fear of falling off). But the idea is, taking part in these local activities is convenient, enriching and easier than giving up fried pork.

Although this year, I think I’ll be sticking with another fried product. After all, I’ve never had a Woodman’s clam, either.

This column appeared originally in North Shore Life magazine. Follow Peter Chianca on Twitter at twitter.com/pchianca. To receive At Large by e-mail, write to info@chianca-at-large.com, with the subject line “SUBSCRIBE.”