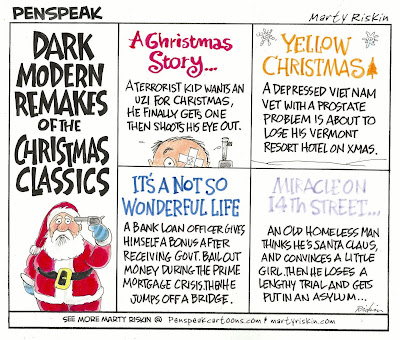 When I was a kid, every year around this time I would watch “Santa Claus Conquers the Martians.” I did this despite the fact that critics regularly put this 1964 movie on their list of the worst films of all time, probably because of its inane plot, juvenile dialogue, bargain-basement costumes and the fact that it appears to have been filmed entirely in a single room that may or may not have been made of cardboard.

I think I may have watched it because as a child, it’s comforting to know that Santa, in addition to bringing you toys every year, is also capable of warding off an alien invasion if necessary. Also, New York’s Channel 9 scheduled it on a Saturday afternoon every December — your choice was either that or reruns of “Hee-Haw” on Channel 11, and Roy Clark certainly never conquered any aliens, with the possible exception of Minnie Pearl. (Incidentally, the entire “Santa Claus Conquers the Martians” is embedded below via Hulu, if you ever have a spare 80 minutes and have a choice between watching that and hitting yourself in the forehead with a plank.)

Of course, there are plenty of other holiday-themed movies that don’t seem to quite get the spirit of the season. Some are downright horrifying, like “Silent Night, Deadly Night,” or anything starring Tim Allen. But others are only just slightly off, like a sugarplum left under your pillow one night too long. (Or wherever the heck those sugarplums were.)

One that comes to mind is “Gremlins,” the 1984 Joe Dante film about horrible little creatures that terrorize a small town at Christmastime, and breakdance. It’s noteworthy not so much for the scene where a Gremlin explodes in a microwave oven (no matter how many thousands of important microwave experiments it may have inspired among America’s youth) but for Phoebe Cates’ speech about the time her father dressed up as Santa Claus and died a horrible death while coming down their chimney. Sadly, no transcript of the speech was included with the thousands of Gremlins dolls under 5-year-olds’ Christmas trees that year.

Another is John Hughes’ “Home Alone 2: Lost in New York” (1992), in which cute (by which I mean possibly sociopathic) Macaulay Culkin gets left behind at Christmas by his parents again, this time in New York City. I thought the first “Home Alone” movie was just stupid, but in watching the second one I realized it teaches children a valuable Yuletide lesson: If Joe Pesci ever tries to break into the house, electrocute him.

And I was particularly disturbed by 2004’s “The Polar Express.” Much has been made of how creepy Robert Zemeckis’ animated characters look, which is exactly the kind of press you want when you spend $166 million making a movie (which, granted, included Tom Hanks’ standard salary, $164 million). Personally, I saw this entire film and don’t remember a single shred of the plot, and yet the Steven Tyler-inspired Aerosmith elf who pops up at the end haunts my dreams, with those pointy ears and gigantic lips — I have visions of him jumping out from behind my Christmas tree and gumming me to death.

The good news is, over the last few years I’ve been able to introduce my kids, now 9 and 11, to a few holiday movies that are outlandish enough to rise above, say, the goop on ABC Family’s “25 Days of Christmas” (in which a grouchy businessperson or Tom Arnold learns the true meaning of the season), but not so bizarre as to keep them up Christmas Eve, not from excitement but from the fear that they will be attacked by Gremlins, or Joe Pesci.

Their hands-down favorite is of course Bob Clark’s “A Christmas Story” (1983), which does off-kilter Christmas just the right way: with fake swearing, almost shooting your eye out and eating mashed potatoes like a piggy. It shows that it’s possible to make a holiday movie that’s funny, moving and even a little bit subversive without being gross or stupid.

If only the Christmas goose had exploded in the Chinese restaurant microwave, it would have been perfect.