Could be worse -- after all, Cheney
doesn't care about anybody 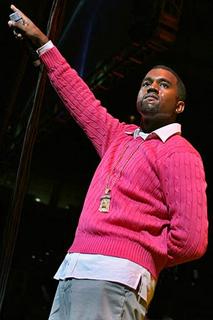 This just in: In the wake of the spectacular reaction to his remarks earlier this week, Kanye West has released a list of other people George Bush doesn't care about:

I think it is a testament to your wit that I know the name "Peter Chianca", in spite of the fact that I've never heard of Kanye West. I'm a poor, white boy living in Roxbury... Not WEST Roxbury! I like to refer to it as Roxburyport near Blue Hill Beach. I'd say Bush cares more about poor whites than poor blacks. Just a thought.

He is an idiot, a moron and an egomaniac.

I’m definitely not a fan of Mr. W. I like Kayne West's music, however I will not purchase it, mainly because he's such an idiot. People come on, this is NOT a race issue 67% of the people that live in New Orleans are black and 27% are white, the rest are other nationalities. So of course when you watch TV that is who you will most likely see.

Unfortunately, the poor people statement is true; he doesn't seem to put any focus on them.

Why does everyone act like it's all Bush's fault? Neither the state nor the local governments sped into action after the hurricane.

As for Kanye West, he's lucky he has the right fan base to say that kind of thing. We all know what happened to the Dixie Chicks.

People are never happy enough until they take freedom of speech as far as it will go.

It is a good thing that people disagree with Bush and that they think for themselves, but spewing random insults doesn't change anything. Let's face it, the constitution was written by politically correct, rich, white males. If you want to blame the government's focus on money, you can go back in time and knock Washington's fake teeth out.

If Kanye West had anything important to say he would have said it in congress and not bite at the heels of people doing their jobs and he wouldn't play off of the 50% of people who actually agree with his opinion.

Check this blog out: http://ghettouprising.blogspot.com/

No Comment!, That is what I'd like to say, however, I will elaborate on how I feel about all of this. Bush is not at fault here. I am an American and I believe that no matter who was voted for, it our place to support, not slander, our president. Bush is at the top of a chain of command. Those below him may not have acted as swiftly as they should have but to put the blame on our country's leader is pretty lame. The mayor of N.O. is a black man, does he not think too highly of the poor? He left them behind and then spouted blame everywhere but on himself?! I really don't even care, it is a travesty that many Americans are playing the blame game, it's low! Worry more about the fact that loved ones are gone, people are shooting the relief workers, many more deceased will be found and many more "people" will be rescued still. BLACK AND WHITE!! I am running a relief center and it is horribly sad to hear what the victims are saying compared to what the "people" who were not even there are saying! So, in my opinion, if you weren't there, shut up, get out there and help the ones who were. Play games later!

Yeah, I guess everyone getting a tax cut, pushing for school vouchers so poor kids can get out of bad schools, pushing Social Security reform so that workers can control their money and make more, and pushing for faith based initiatives to help out addicts, are all examples of how President Bush really doesn't care about poor people. Maybe one day Democrats will wake up, look at facts, and stop spewing propoganda.