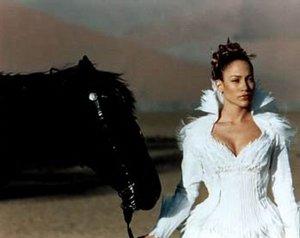 Watch out, horse -- you may be next.
This just in: Heather McCartney has announced that she will begin stalking Jennifer Lopez until Lopez realizes that it's wrong to wear fur. Now, how come when the wife of a billionaire ex-Beatle stalks Jennifer Lopez it's considered a valiant fight for a noble cause, and yet when I do it I'm threatened with restraining orders? I'm speaking hypothetically, sort of.

For her part, Lopez has said in the past she was unaware of exactly how fur was made. Although it's safe to presume she had a vague idea that it had to be forcibly removed from the animal in order to be worn -- otherwise her chinchilla bustier would be trying to claw her to death.

The statements of both Lopez and McCartney seem bizarre to me.

so i'm thinking that heather mccartney doesn't have enough to keep her busy.

Heather has improved the lives of countless individuals in spite of having a difficult life. A live that changed dramatically when, in 1993, she lost a leg in a car accident. Rather than feeling sorry for herself, she came up with a program which provides artificial limbs to those who can not afford them.

Here is an excerpt from Heather's site ~ I encourage any other ignorant smart arses out there to read it and also check out her site via the link below.

"Heather Mills McCartney is a patron of Adopt-A-Minefield and a United Nations Association Goodwill Ambassador who has tirelessly campaigned for over 11 years to raise funds and awareness to rid the world of landmines. Heather has made a career out of voluntarily counselling people from around the globe who have lost limbs in accidents, through illness, natural disasters and terrorist atrocities. She has given people hope and inspiration through countless lectures and meetings before audiences ranging in size from 30 to 3,000. It is Heather’s determination and commitment that finds her inspiring people of all ages from around the world. She lets them know personally, in daily correspondence, that they can make a difference."