What the boys didn't know
was that Uncle Jesse was
cookin' up a plan of his own ... 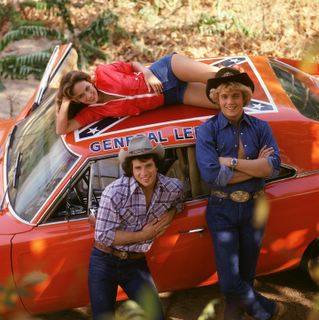 Now, those are Dukes!

The former Cooter's problem was that based on a script he'd seen, he thought the new version did too much sexing up of the wholesome family show he'd been a part of. (You know, the wholesome family show about moonshiners who may or may not have been in love with their barely dressed cousin.) Not having seen it I can't speak to whether or not it's trashier than the original, but I think it's safe to say the fans concerned that it might overdo the psychological ennui can breathe a sigh of relief.

Personally, as someone who after watching the show at age 11 has spent the rest of his life battling the urge to enter and exit his car through the window, I tend to agree with Cooter that the original is not to be trifled with. (I think we can all agree that Johnny Knoxville is no Mr. Tom Wopat.) But I'm still glad it's a hit, if only because that could possibly lead to a big-screen "BJ and the Bear."

Casting suggestions, anyone? I see Nicholson as Sheriff Lobo.

I was so disappointed that Daisy isn't a brunette and I don't remember her being a DING BAT??? Do you think they have Rosco Pico Train and Boss Hogg in the new movie?

I hear it got bad reviews despite big ticket sales, so I think I will pass on this one.

I hope they come out with a Smokey and the Bandit ;)

So I haven't seen the orignal or new Dukes...before my time, and I have not interest in it...Bj and the bear...what's that about? Does it have any similarities to Clint Eastwood movie where he has the ape with him...I can't spell the word for it..I thought Smokey and the Bandit was already made...why make it over...sorta like Bad News Bears...why make a movie everyone has seen...and they wonder why ticket sells are slumping...hmmm

P.S. When casting begins, I want to be the Bandit...cause Bandit sounds cool, like the dog on Johnny Quest...yeah

now i can't stop singing the b.j. and the bear song!

hey there where ya goin
not exactly knowin
who says.........

p. knows the entire song. but the best part is, of course:

it's b.j. mackay and this is his best friend, bear.

You mean to tell me that after all these (and my) years, that you can get out of a car some other way? No wonder my doctor thinks I'm lying when I tell him how I always get the bruises! lol I havent seen the new one yet but was in love with John S. for years as a teen. Can't wait to see the movie, good or not!