So Johnny, if you're ever
exposed to gamma radiation
and turned into a hulking monster,
remember, that's no reason to be rude 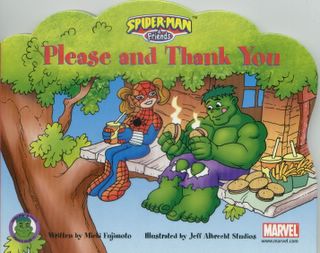 
Now, if I remember my comic books correctly, the Incredible Hulk was raging, violent maniac, prone to smashing anything (cars, buildings, that supervillain with the huge forehead) that got in his way. So should I find it disturbing that there appears to be a series of children's books in which the Hulk helps kids learn good manners? In a treehouse? While eating hamburgers and french fries? With "Spider-Girl"?

I'm against the whole thing. First of all, Hulk wouldn't be caught dead in a treehouse, unless he was smashing it into little splinters in a gamma ray-induced explosion of anger. Second, he wouldn't say "please" or "thank you" under any circumstances; he would say "Hulk smash!" Or if it was the TV show he would say "ARRRRRGHHH!" But not in a polite way.

All I know is, if the Hulk of the comic books, or the TV show, or the horrible movie in which Nick Nolte turns into a giant, energy-sucking jellyfish, acted in a polite manner, that wouldn't have been good for anybody. Except possibly those people who kept beating up Bill Bixby every week.

Puny Human...god I hate these sort of things, like the toys that look like the drawing you posted. The Hulk isn't nice. Jesus, the whole thing now is Bruce Banner was trying to commit suicide and each time the Hulk...well Hulked out...and destroyed everything around, and when Banner woke up thus the cycle began again. It was a great story...neither one knowing what the other did...if there was ever a reason for me to hate children this is it...

Maybe Hulk's PR Rep is trying to soften up his image. He isn't getting any younger.

It's been a difficult road for The Hulk. He was turned down for the Green Giant Commercial. Its a tragedy.

Underachiever said...
This comment has been removed by a blog administrator.
August 17, 2005 1:25 AM

it is a sad sad day for mankind. all this pc crap makes me want to train my kid a la ted nugent.

If Hulk were going through some kind of finishing school thing, might he learn to wear clothes? Perhaps all his rage is really due to low blood sugar. I get that way sometimes. The burger and coke helps that, I'm sure. Just look out Spider Girl, cause when he crashes, it ain't gonna be pretty.

Totally right about the PR thing. Hulk needs to glaze over that troubled past if he ever wants to step up to the plate as the next govenor of California. I mean a children's book series is a good start. Maybe some charity work?

Anything to move past the whole smashing issue. Oh and that video with the cheerleaders. But hey it was the seventies and everybody was acting crazy right?

And I mean he's got his whole line for the election.
Hulk smash (taxes, utility costs, corporate pollution credits, whatever is the cause du jour)!!!!

It's also a simple pithy rejoinder to any media question.
Q: Mr. Hulk what is your opinion on the current imigration crisis within California?
A: Hulk Smash! (see that's clever because they can't tell what side of the issue he's on.)

Q: Do you support the death penalty?
A: Hulk Smash!!!
(again - they've received an answer but are still lost behind the good old Angry Fog Shield)

Q: How do you respond to the allegation that you attempt to resolve every crisis facing this state by smashing?
A: Hulk uh... RAAAARRGHHHH!!!

Well back to the PR guy. It's as bad as that "Yeehaw!" fiasco last election race.